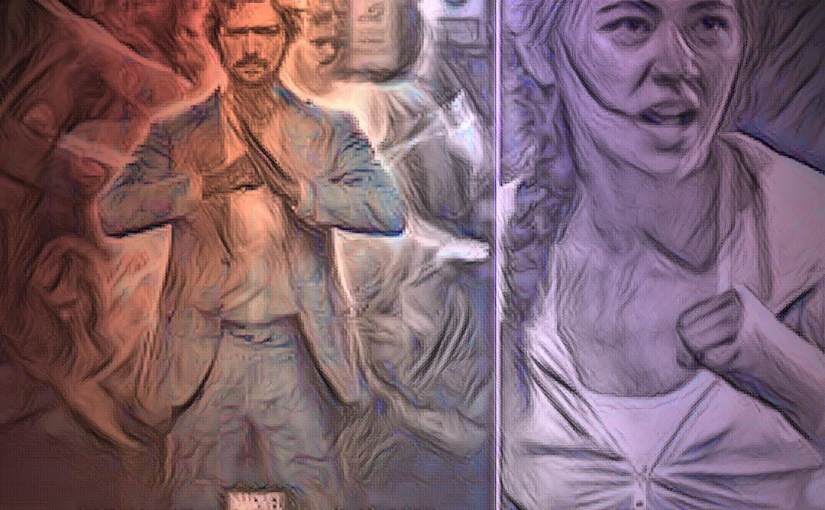 Having just finished binge-watching both Netflix’s shows, Iron Fist and The Defenders and, for the most part, enjoying them, here are my belated thoughts on the latest additions to the MCU – Marvel Cinematic universe – televisual rostrum. This blog will focus on Iron Fist.
In order of preference, Daredevil, Jessica Jones and Luke Cage were great shows, setting up and defining the lead and central characters perfectly. Matt Murdock, the blind lawyer whose sense of duty and justice is fuelled by rage and a fearless need to defend his city, New York, as the Daredevil. Jessica Jones, a reluctant superhero, imbued with superhuman strength and a sense of right that she fights to suppress, feeling her involvement in any situation immediately makes it worse and Luke Cage, bulletproof and super strong, he only wants to keep his neighbourhood safe, feeling that, with his particular gifts, he is duty bound to do so.
All the aforementioned shows created compelling and believable central protagonist, their foibles and struggle relatable and recognisable. In Iron Fist, the fourth and final character to be introduced before all the characters being brought together, the previous formula is, inexplicably, ignored.
Danny Rand, who is – as he tells us repeatedly as though he suffers from some form of braggadocio Tourette’s – the immortal Iron Fist, is a man who returns from obscurity, having been presumed dead, to claim his billion dollar fortune and occasionally fight bad people – not particularly impressively for a person who had trained everyday since childhood to be a warrior, but I will get to that.
Iron Fist suffers from a few problems, one being the comparison with its better predecessors, second being miscasting and perhaps the biggest issue is the writing. That is not to say the writing is bad. It is great for just about every character except for the oft-mentioned immortal Iron Fist. In a thirteen episode series – thirteen hours of my life! – the only character who does not evolve is Danny ‘I am the immortal Iron Fist’ Rand.
Rand’s purpose is also muddled. Having returned to New York to….truthfully I not sure what his reasons were for returning to New York. Fifteen years have passed since he disappeared, presumed dead, he returns to his father’s former company building, looking like a hobo and is mystified as to why nobody will accept that he is Danny Rand, somehow still the rightful owner of fifty-one percent of the multi-billion-dollar Rand corporation, even though all the world thought him dead.
A superhero, martial arts series, which is the loose concept of Iron Fist, turns into a tedious corporate power struggle show. Did I say martial arts? Right. Aside from saddling Finn Jones, the actor who plays Danny Rand, with the Herculean task of making Rand relatable, he also is supposed to be a fierce martial arts warrior – the immortal Iron Fist. Unfortunately, everybody he fights seems to be a more competent martial artist than he is. In both shows! In The Defenders, Daredevil exhibits a level of fighting prowess that the immortal Iron Fist could only dream of matching.
The wide shots favoured in the better fight films of modern times do Jones no favours, though he does noticeably improve between Iron Fist and The Defenders, but not enough for him to convince as a character of true formidable fighting skill. Perhaps that was the reason Iron Fist was so much exposition as opposed to action, with the little action there is involving the immortal Iron Fist lacklustre. That is not to say all is lost action wise. It would seem, as is the way of television, that Danny needed a love interest – not to mention something to save the show from martial arts mediocrity – to that end the character of Colleen Wing, played by a fantastic Jessica Henwick, lifts proceedings every time she is in a scene. Her fight scenes are also some of the best in the series.
It is a pity that the fight scenes for the central character are so underwhelming, as the aesthetics of the rest of the show are quite impressive, likewise the performances from just about every other actor. Even the pacing is quite good, even if there were times when I wished someone, anyone, would fight.
In conclusion, Iron Fist is passable entertainment without ever reaching or even threatening to reach the heights of previous MCU fare. What is more unfortunate is the fact that Iron Fist is the launch pad for The Defenders, thus thrusting the perennially dull Rand, ‘I am the immortal Iron Fist’ quote in tow, front and centre of a series with far richer characters.

One thought on “I Am The Immortal Iron Fist! (we know!)”