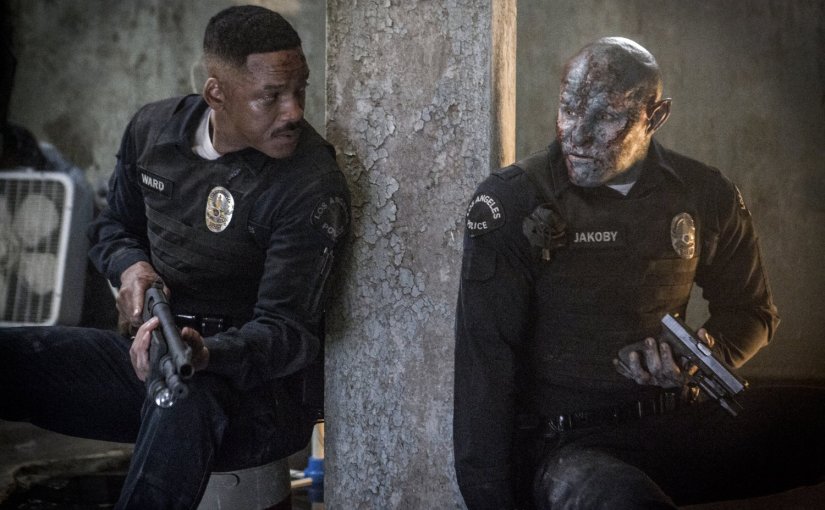 BRIGHT is the latest offering from David Ayer, the writer, director and producer, whose most recent works include Suicide Squad, Sabotage and End Of Watch. He is perhaps best known for two of his earlier works, The Fast And The Furious and the critically acclaimed Training Day. On Bright, Ayer is on director duty, the screenplay having been written by Max Landis, whose most notable writing credit is the 2012 superpowers thriller, Chronicle.
Bright tells the story of a world where humans, orcs and elves live an uneasy coexistence, with elves being societies elite, orcs the bottom of the pile and the humans somewhere in-between. Quite why Landis decided to use orcs and elves, as opposed to creating new beings or characters, is not a question I can answer. I can only think that by using the normally opposed races Landis was hoping it would speed the story along. It doesn’t. If anything, it pulls you out of the story, especially the elves, who are LOTR (Lord Of The Rings) extras in Matrix get up. The budget does not quite stretch to creating the orcs with the same intensity they had in LOTR.
Will Smith, turning in an I, Robot performance, plays Daryl Ward, a street cop forced to work with the affable orc Nick Jakoby, played by Joel Edgerton, only recognisable by his gait under the orc make-up. Ward distrust Jakoby after he is shot by an orc whilst waiting for his partner to buy lunch. He suspects that Jakoby let the assailant escape due to him being an Orc. On returning to duty, his human colleagues, all of whom are small-minded and wear their prejudice with pride, try to encourage him to turn against his orc partner. Giving them short shrift, Ward and Jacob hit the streets.
They encounter Montehugh, a hirsute, dirty, half-naked man, wielding a sword and after persuading him to put the sword down, arrest him. Whilst in the back of the car, the seemingly crazy man suddenly – with an exposition scene that lands like Thor’s hammer – starts talking in orcish. He also throws up in the back of the car, which later leads to a scene in which Internal Affairs come to have a covert meeting with Ward to persuade him that turning on his partner would be in his best interest.
Meanwhile, Montehugh, the orcish speaking, sword-wielding vagabond, is visited by an elf and a human from the magic division – really – who wants to know about his babblings. As this is going on, Ward and Jakoby are attending a call where they come upon charred bodies and an elf crucifixion. They also meet Tikka (Lucy Fry) a terrified elf who is protecting a much sort after, wand. When back-up for Ward and Jakoby turn up, their four colleagues, in another exposition scene, try to persuade Ward to kill Jakoby so as they might keep the wand that can grant them any wish they desire – once again, really.
Exposition is next given in one sentence when Ward warns Jakoby not to reach for his gun because he would stand no chance against him in a gunfight. He then proceeds to kill the other four policemen who, of course, had planned to kill them both anyway; he is amazing in gunfights. The wand is now common knowledge in the city and everybody wants it. It’s a wishing wand you know. Humans cannot touch the wand without exploding – or maybe that’s anyone, that is never quite explained. Humans definitely explode though. Unless they are a….Bright. Really.
Remember babbling exposition man, Montehugh, in the back of the police car? He signposts that Ward is a Bright – that is not a spoiler, a small child would have seen it. The rest of the film is basically a chase film, where everyone pursues the wand – not the ring. Sorry.
Bright suffers from two major faults – there are more, but only two major ones – it is too shorts for the many varied themes it tries to cover. Bright would undoubtedly have been served better as a short series, four to six episodes maybe. Secondly, it is rushed, which sort of feeds into the first point, but if the slight book that was The Hobbit can be stretched into a trilogy of – admittedly – overlong films, how can a similar story be condensed into less than two hours? It can’t.
Bright tries to cover themes of race, prejudice, class, greed and avarice. Unfortunately, it fails on all fronts due to some heavy-handed writing and a runtime that is short by present standards. Bright turns out to be pretty dim.