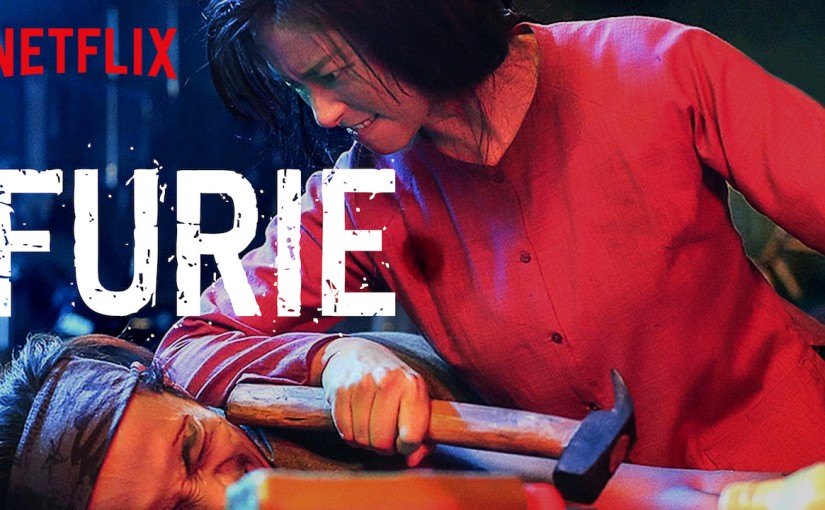 Hai Phuong (Veronica Ngo) is a single mother bringing up her daughter, Mai (Cat Vy) in a small village in Vietnam. She earns money as a debt collector for a local businesswoman, a variation on the same job she used to do when she lived in Saigon before falling pregnant with Mai.

The locals shun Phuong, disdainful of the way she earns money, and the kids at school bully Mai, ribbing her for being a child of a single parent and her mother being a debt collector. Mai tells her mother that she wants to start a fish farm and drop out of school. Phuong wants her daughter to get a good education.

A couple of old pearl earrings are the only thing Phuong has from her late father that is of any value. She and Mai go to Can Tho city and Phuong tries to sell the earrings whilst Mai hangs out in the market. Mai gets accused of trying to steal a purse. Phuong asks her if she stole the purse. Mai tells her mother she picked it up off of the ground.

The crowd insist she stole the purse and accuse Phuong of being a bad mother. They say Mai has probably stolen more items and that she should empty her pockets. Phuong, feeling pressured by the mob, tells Mai to empty her pockets. Mai refuses and runs off, going and sitting by the river.

Phuong decides not to sell the earrings. She goes looking for Mai and hears her shouting. She has been snatched by some men at the river. Phuong chases after the men who grabbed her, fighting her way through the market. As the boat with Mai goes down the river, Phuong follows the river and the boat on a stolen moped.

She finds the boat moored a few miles downriver and sees the men with Mai on a bus departing for Saigon. Phuong jumps in the back of cargo truck going to Saigon. She goes to the old club she used to work at and finds everything has changed in the decade since she left. Thanh Soi (Hoa Tran) is the big name in town and who Phuong needs to find.

Phuong goes to the police but sees that they are not making much headway in finding the many missing children they have on their books, even though they are mounting a large operation headed up by Luong (Thanh Nhien Phan), a highly decorated and successful detective.

She gets the addresses of some of the people connected to the operation and goes snooping herself. She finds Truc (Pham Anh Khoa) and beats the location of Soi out of him. She goes to Soi’s hideout and fights her way to the boss woman. Soi easily best her, even making a phone call whilst doing so, knocking her unconscious and having her chained up and thrown into the river.

Luong finds her and takes her to the hospital. She says she has to leave, as she needs to save her daughter. Luong refuses and tells her she has to stay in the hospital. The nurse helps her to escape by pretending to be a hostage. Luong lets her go. Phuong goes to see her brother, he is not happy to see her and kicks her out.

Luong, who had jumped on the train behind Phuong, is on the section of the train without the children and sees the train separate. He calls for backup. Phuong finds Mai. Mai tells her that there are loads of others on the train. Waiting for the train are Soi’s henchmen. When the carriage stops, Phuong sneaks off of the train and beats up the henchmen. She is shot by one of them. As he is about to kill her, Luong turns up and shoots him.

The kidnap ring is broken and Phuong is proclaimed a hero in the press. The end.

Directed by Le-Van Kiet, Netflix’s Furie is an, above average, actioner by numbers. Veronica Ngo is compelling as the determined and fearless Phuong, fighting her way across Vietnam. With the great fight choreography and competent performances, Furie, for the most part, blazes through its near one hundred minute runtime.

The parent trying to recover their child has become quite a popular idea in film. Done many times, it probably found its peak in Liam Neeson’s Taken. Whereas before, a parent would get armed to the teeth and hunt down the kidnappers. Taken, though it had gunplay, had a whole lot of hand to hand combat.

Furie, going more old school, has very little gunplay. The martial arts are fluid and awe-inspiring the way good fight scenes are when done by high-level stunt people and lensed so as to see the action. The contrast between the village and city really works well, as does the chase scenes, giving a real sense of urgency when Phuong is chasing after her daughter.

This film is Ngo’s film. She drives the story and brings the emotion. Believable as the battling Phuong, she keeps your attention right up to the final frame. Furie is a nice actioner and worth a watch on a lazy afternoon.