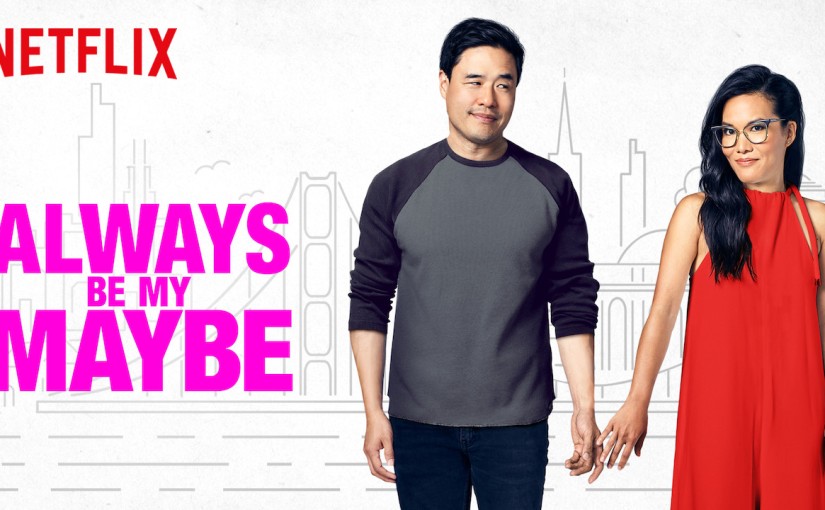 Chinese-American, Sasha (Ali Wong) and Korean-American, Marcus (Randall Park) have been friends since childhood. Sasha, a latchkey kid, always spent her time at Marcus’ parents, Harry (James Saito) and Judy Kim (Susan Park) house in San Francisco. Judy, a great cook, taught Sasha how to cook and left her with a love of food and cooking. Sasha and Marcus spent their childhood hanging out together. Marcus even formed a band, Hello Peril. One day when the two of them are out fishing, Harry comes and finds them. Judy has died.

Shortly afterwards, Marcus and Sasha get together. Shortly after that, they split up, arguing over the death of Marcus’ mother. They do not see one another for sixteen years. In the intervening years, Sasha has become a highly successful chef and has a high powered, restaurant developer fiancé, Brandon Choi (Daniel Day Kim). She lives in Los Angeles. She has to go to San Francisco to open a new restaurant.

Marcus’ life has not moved on at all. He lives with his father in his parents old home, working as an air conditioning installer with his father. He spends his downtime smoking weed. Brandon tells Sasha he wants to go to India for six months and find himself. He tells her the separation will be good for them. Sasha tells her best friend and PA, Veronica (Michelle Buteau), that she thinks it’s a good idea. Veronica has also known Marcus and his family since childhood.

Sasha rents a house in San Francisco. Veronica gets Harry and Marcus to come and put in air conditioning. Marcus sees Sasha for the first time in sixteen years, as does Harry, who is very happy to see her. Harry lets slip that Marcus still has a band and that Sasha should go and see them. Sasha says she will be too busy. Sasha goes with Veronica to see the band.

Sasha and Veronica and Marcus are chatting after the gig when Marcus girlfriend, Jenny (Vivian Bang) comes and kisses him. Marcus introduces the two ladies. Jenny invites Sasha back to eat, wanting Sasha to sample her food. Her food is terrible. Marcus takes Sasha home. He still has the same car that they had sex in sixteen years before.

Sasha invites Marcus to a cousin’s eight-year-old birthday party. At the party, Sasha gets a call from Brandon and has a very public breakup in front of the guest. Marcus takes Sasha out to eat and listens to her rant about Brandon and her past. He reminds her of how good her life was. Marcus is very reluctant to step outside of the comfort zone of his life, never wanting to leave San Francisco.

Harry tells his son that he should get together with Sasha. He decides he is going to go for it, but when he meets up with her, she is excited and tells him that she has met someone special. She says that they should go on a double date. Marcus agrees, bringing Jenny along. When they get to the restaurant Sasha’s date turns up and it is Keanu Reeves.

Reeves captivates the women, but acts like a complete prick, making Marcus feel small. After he pays the exorbitant food bill, he invites them back to his home. He invites them to play a game that gets out of hand and ends up with him nearly choking out Marcus. Sasha stops him and leaves with Marcus. Jenny stays, wanting to get closer to Reeves.

Sasha and Marcus get amorous in the Uber on the way home and end up together. Marcus is uncomfortable with Sasha’s fame and does not want to go to New York with her for the new opening. She confesses her love for him and asks him if he wants to come with her. He refuses. The next day she leaves San Francisco.

Marcus cleans up his life and follows Sasha to New York, telling her he will be wherever she is to get her back. Sasha opens a restaurant honouring Marcus’ mother called Judy’s way. The end.

Always Be My Maybe is written by Michael Golamco, Ali Wong and Randall Park. Wong and Park are both stand-up comedians, something that is evident in the script. The film is more like a collection of loosely connected sketches than a coherent story.

That is not to say there is no story, there is. It is just that the story, such as it is, struggles to fill its one hundred minute runtime. I do not think this is because there is not enough story to be told, it is just that the story is secondary to the humour. Wong and Park work as the central pairing in this Asian rom-com, but the best part of the film are the scenes that feature Keanu Reeves, brilliantly sending up himself.

The rest of the film, though pleasant, does not have enough emotional range to elicit the feels required for a rom-com to work. At no time do you think that there a possibility of Sasha and Marcus not getting together, especially as all their romantic options are eliminated as being awful, crazy or self-centred.

Most of the humour in the film, outside of the Reeves scenes, comes in the form of sparkling witticisms and sharp lines, with very little coming from the situations or the story. The directing by Nahnatchka Khan is competent without being noteworthy. What is really good is the soundtrack of the film, the music is brilliant.

The real problem with Always Be My Maybe is it is one toned. There are no emotional peaks and troughs which makes it difficult to be kept engaged by proceedings. Always Be My Maybe – a great title – is a pleasant but somewhat uninspiring rom-com. It is not a bad film, but it is not good enough to make time for either. If you have nothing else to do and want something on in the background, it could be worth a watch.