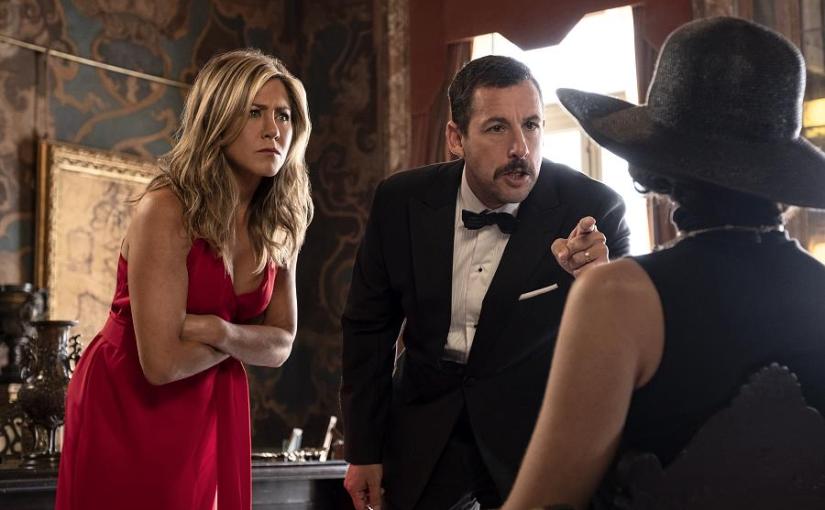 Nick Spitz (Adam Sandler) is a New York police officer. His fifteen-year anniversary to wife, Audrey (Jennifer Aniston), a hairdresser, is coming up in the next few days and his career is stalled as he keeps failing the detective exam. Audrey believes he is already a detective because he is too embarrassed to tell her he has failed the exam.

Audrey bemoans the fact that, in almost fifteen years of marriage, Nick has not fulfilled his promise to take her to Europe. Whilst out to dinner with friends the night before their anniversary, Nick intimates that he has a big surprise for her, even as one of the friend’s doubts he would have bought anything better than a gift card, which it turns out is exactly the gift he bought.

Later, when they are back home, a frustrated Audrey confronts Nick about his promise to take her to Europe. Nick lies and tells her that was the surprise. The next day the two of them take a flight to Europe, Nick having planned a cheap road tour around the continent.

On the flight, as Nick sleeps, Audrey sneaks into the first-class section. Whilst there, she meets Viscount Charles Cavendish (Luke Evans). He tells her about his sadness at having lost his love, Suki Nakamura (Shioli Kutsuna) to his elderly, rich uncle, Malcolm Quince (Terence Stamp).

Nick, having woken up, finds Audrey in first-class with Charles. Charles invites both of them to come and join him on his uncle’s yacht for a party his uncle is having. After initially deciding against it, the couple take Charles up on his invitation and join him on the yacht. Quince is worth seventy billion dollars and has gathered those closest to him on the yacht to reveal how his fortune will be distributed.

Malcolm Quince has gathered all of them together to tell them his decision regarding his fortune. He tells them that he has decided to leave all of his money to his girlfriend, Suki. As he prepares to sign the document that will give all the money to Suki, the lights go out. When they come back on, Quince has been killed, stabbed in the chest.

Audrey tells everyone that Nick is a detective and that he should take charge. Nick tells them to seal off the area and call Interpol. Audrey, a big fan of murder mystery books, is convinced it is a two-person job. Nick says it is Tobias, she disagrees, saying he is too obvious. They hear a gunshot. Tobias is dead by apparent suicide.

The yacht docks in Monaco and Inspector Laurent Delacroix (Dany Boon) takes over the investigation. All of the Quince’s friends and relatives point toward the Spitz’s as being the aberration. They become his chief suspects. The inspector tells Nick that he knows he failed the detective exam. Audrey, who is out of the room, still does not know.

Cavendish provides accommodation for the Spitz’s and they decide to conduct their own investigation, determined to find the murder and lift suspicion from themselves. They talk to some of the group but get nowhere. Back at the hotel, a note is slipped under their door telling them to come to another room.

When they go to the room, Sergei is waiting for them. He tells them that the colonel had a beautiful girlfriend, but got injured saving Quince from a bomb. Whilst he recovered, Quince married his girlfriend. She fell pregnant and died in childbirth. Someone knocks at the door and Sergei tells them to hide in a wardrobe.

Whilst they are hiding, Sergei gets killed. Meanwhile, the Spitz’s have become the number one suspects for the murders and their pictures appear on television. The inspector also says that Nick is not a detective. Audrey sees the broadcast and is furious. She walks off and is picked up by Cavendish. He says he is going to get her out of Monte Carlo. He takes her to Lake Como. Nick follows.

Audrey finds some Japanese tablets in Cavendish’s car and concludes he and Suki planned the murders together. Nick catches up with her. She tells him her theory and he agrees. They see Suki in the street and follow her. She doubles back and catches them but is promptly killed by someone in a mask.

Nick chases after the assailant and hits them with a plate. The inspector finds Suki and is determined to catch the Spitz’s. Nick calls him and tells him where they are going. They go to catch Cavendish and find him dead, poisoned. They figure out who the murder is and gather the remaining suspects in the house at Lake Como.

With a runtime of ninety-seven minutes, Murder Mystery is a comedy in the style of an Agatha Christie murder mystery. With longtime friends, Sandler and Aniston, taking the lead, and both being well versed in comedy, they are ably supported by a strong cast in this straightforward comedy mystery.

By no means, a great film, Murder Mystery is, nonetheless, entertaining and engaging enough over its runtime. Snappily directed by Kyle Newacheck, with an amusing screenplay by James Vanderbilt, it is not going to trouble any of its peers come awards season.

Set in beautiful European locations, the film looks beautiful and colours pop adding to the vibrant nature of the film. Sandler is not pushing for any creative heights as the everyman Nick, and neither does Aniston have to stray far from her well worn Rachel-esque persona to be Audrey.

Though that might sound like damning criticism, within the confines of this film those personas work perfectly well. It is left to the rest of the cast to ham it up, with Evans especially seeming to relish being the suave Cavendish. Murder Mystery is exactly what one would expect and, as long as you have no unreasonable expectations, it will give you a chuckle without taxing the brain.