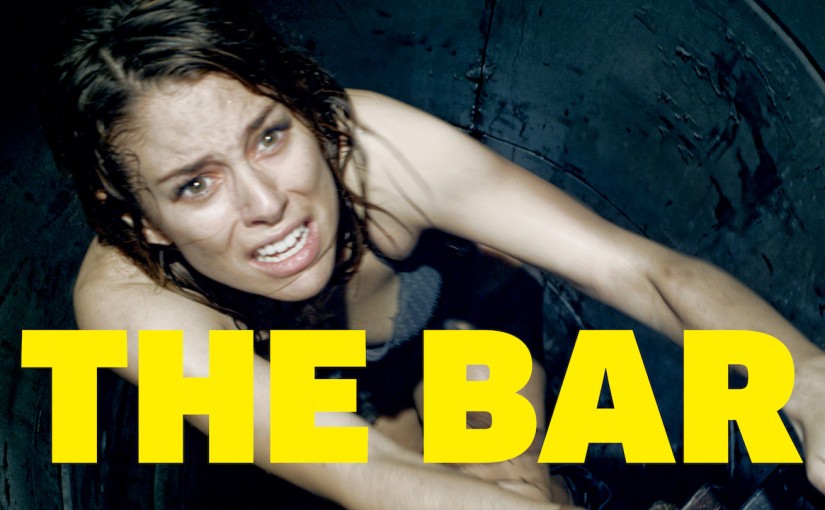 Elena (Bianca Suárez) is a beautiful young woman living in Madrid. She goes about her life, chatting on the phone to her friend as she explains what she has worn for a date she is on her way to. Sergio (Alejandro Awada) is enthusiastically telling someone about a great deal he has on some merchandise.

A couple of police officer moves on a rogue sleeping, bible quoting, beggar, Israel (Jaime Ordóñez). He gives them an earful for their troubles. Trini (Carmen Michi) wants to purchases some fruit but only has a twenty euro note. She tells the fruit vendor to put it on her tab.

Elena keeps chatting but is cut off as her phone battery dies. She is in front of a small cafe/bar and goes in to try and see if she can get her phone charged. As she enters the bar all of the patrons turn to look at her. She is that kind of attractive. Elena goes and orders a coffee. A mesmerised Sátur (Secun de la Rosa), asks if she would like sugar. No saccharine.

Amparo (Terele Pávez) owns the bar and is not afraid to voice her displeasure as a fat man (Daniel Arribas) comes into the bar coughing loudly and pointing towards the toilet. Already in the bar, Andrés (Joaquin Climent), an ex-policeman, a tech and advertising worker, Nacho (Mario Casas), and an office worker (Diego Braguinsky).

As Sátur fusses over Elena at the bar, a street sweeper (Jordi Aguilar) comes in. Israel comes in and screams expletives. Shocking to those who do not know him, Amparo is unfazed and tells him to pipe down. Trini comes into the bar and goes straight to the slot machine. She stops to get some change from Amparo and then returns to the machine.

Israel bothers Elena as Andrés tells Amparo that he should be in a shelter. The officer worker pays for his coffee. Sergio enters the bar and immediately orders a coffee. The office worker who has just exited is shot in the head. Everyone in the bar is shocked with the exception of Nacho, who is wearing headphones and does not notice the commotion.

As they look out at the office worker dead on the ground, they notice that the streets are deserted. Sátur tries to call the police but cannot get a signal. Elena notices the office worker moving. He is alive. Everyone is too afraid to go out. The street sweeper decides to go out. He gets killed.

Everybody in the bar freaks out, convinced that a gunman is targeting the bar. They all hit the floor. There is silence outside, no movement or people at all. They turn on the television to see if there are any reports. Nothing. Trini notices that the bodies have gone. The seven captives start to get anxious. Andrés’ getting snappy, Israel’s bible quoting grating on him.

Sâtur puts forward a theory that they are all in a dream or the government is stress testing them. Amparo slaps the notion out of him. Literally. Sergio picks up the notion of a government conspiracy but says that maybe the police are after a terrorist, who is in the bar. It is better to kill eight people rather than risk thousands, he reasons.

Nacho goes and tries to hide his bag. Sergio notices and he and Andrés grab him. they want to know what is in the bag. He refuses to say. They open the bag. It has his hard drive in it, with his campaign work. Elena smashes it. Nacho points out that Sergio has a briefcase. He too refuses to let anyone see the contents. Amparo grabs the case, Sergio moves toward her and Sátur grabs him. Sergio strikes Sátur. Andrés pulls out a gun.

Israel grabs the case and runs to the front door. He opens the case. It is full of women’s underwear.  A noise comes from the toilet, Amparo remembers the fat man is still in there. Andrés shoots the lock. The fat man is over the toilet bowl, shuddering. They think he is on drugs.

Trini sees a truck. Men in hazard suits and mask get out of the truck and pile tyres outside of the bar and set them on fire. On the news, broadcast says downtown Madrid have been evacuated due to fire. Sergio suspects that it is to cover up the murders. The fat man staggers out of the toilet. He looks awful, eyes bulging and pus oozing from scabs. He collapses to the floor.

As Elena goes to help him, he warns her not to touch him. He dies. Sátur checks his pulse, he’s dead. The fat man had a mobile phone. A photo of himself on the screen shows he was in the military. His phone has a signal. Nacho calls a girl at his office to try and get their situation on the news. Sátur screams down the phone in a panic and the girl hangs up.

Andrés says he knows who to call, but Amparo tells him not to touch the phone. It been infected by the dead man and possibly, so have Nacho, Sátur, Elena, Trini and Israel, all having come into contact with him. Andrés pulls his gun again. He, Sergio and Amparo separate from the others. Amparo tells them to go into the basement. They take the fat man’s corpse with them.

Trini begins to panic in the basement storeroom and wants to get out. As she acts out, she knocks over some drinks bottles. The liquid disappears quickly. Sátur tells them it has gone down the drain, the drain leads into the sewers. They uncover the drain and Israel tries to squeeze into the sewers. Whilst he is stuck in the drain, they hear shots from the bar. Then the hatch to the bar begins to smoke. The bar has been set on fire.

As Elena, Nacho and Sátur struggle to get Israel out of the drain, Trini panics again and runs up to the hatch and burns her hands trying to get out. A little later they ascend to the bar. The bar is now a charred wreck. The fat man’s mobile buzzes in the bar. He has a message. They go through his messages. There is a possible cure for whatever ailment killed him. There is a vaccine but only four doses. Nacho has picked up Andrés’ gun.

Sátur checks the fat man’s body. No syringes. Israel finds them in the toilet. He takes one dose, even as Nacho points the gun at him. Nacho attacks him and is overcome, Israel ending up with the gun. As they fight, the remaining doses fall down into the basement. Trini goes to retrieve them but ends up dropping them into the sewer.

Elena is the only one slim enough to fit down the drain. She squeezes into the sewers but refuses to send the syringes back up. She forces them all to come down. Nacho makes the hole bigger and they all squeeze into the sewers. Elena hides the syringes. Trini panics again. In the confusion, Nacho attacks Israel and they fight, disappearing below into the sewerage waters. Shots go off and Nacho reappears.

As they go through the tunnels, Trini tries to drown Sátur as there are only three doses. She says she was gambling on everyone thinking it was an accident. She tells Nacho to kill her, but he cannot. Trini takes the gun and shoots herself. They move on, following Elena to the place where she hid the syringes. She retrieves the syringes, one for each of them.

Israel is not dead. He kills Sátur. Nacho and Elena run. He pursues them. They find an exit to street level, but Elena drops her syringe. Israel is right behind them. Nacho give her his syringe as Israel grabs him and pulls them both into the sewers. Elena escapes on to the Madrid streets, traumatised by her experience. The end.

The Bar or El Bar in Spanish, is a brilliantly directed and edited film from Álex de la Iglesia, who also co-wrote it with Jorge Guerricaechevarría. From the director’s credit at the begin blending straight into Bianca Suárez’s Elena walking into shot to the final shots of her walking around dazed and confused, The Bar hurtles through its one hundred minute runtime.

After quickly introducing the main protagonists, in the first seven minutes, the event that launches the film, the first shooting, happens and it is a camera work masterclass in the set up. It happened so fast I actually had to rewind the scene. With the immediately heightened situation, the characters reveal themselves quickly.

All the actors on show are great, their performances allowing you to overlook the somewhat farfetched aspects of the premise – everyone knows to immediately disappear after the shooting? How? – that does not detract from the acting however. Though Elena is the easiest character to root for, it is Sátur who is the true moral compass of proceedings.

His character honestly wants everybody to be safe and well. The extreme situation they find themselves in, exposes the true character of all present. Even the seemingly crazy Israel, so fantastically portrayed by Jaime Ordóñez, wants to live and understands the gravity of their predicament.

The pace of the film is pretty relentless, with very little let up, with either a character acting up out of fear or a piece of information pushing the story into a new direction. The Bar is a highly enjoyable and well made film. If you can ignore the obvious plot holes and suspend disbelief, it is worth one hundred minutes of your time.