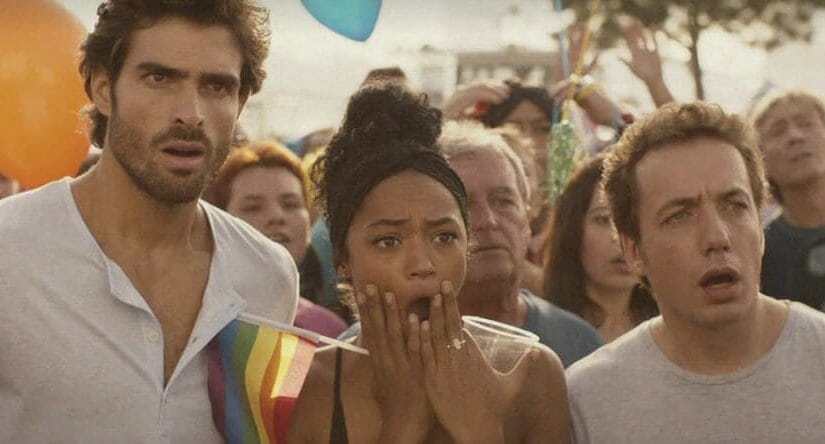 It is a truism that, generally, a person likes to believe themselves to be right. That is not to say that their every utterance is correct or that they are never wrong. No, it more relates to what they believe, what their guiding principals are. One tends to embrace beliefs that make them feel safe and that reinforce their view of the world.

Whether those beliefs are religious or spiritual, logical or pragmatic, we all have things we believe that help us to make sense of the world and our place in it. This is the underlying premise of the delightful comedic film, The Laws of Thermodynamics or Las Leyes de la Termodinámicas, to give it its Spanish title.

Manel (Vito Sanz) is a teaching assistant at a University in Barcelona. His field of expertise is astrophysics, and he is writing a thesis on thermodynamics and its impact on people. Manel believes everything in life is subject to the laws of thermodynamics.

Back before his second breakup, Manel is walking across campus on his way to meet his friend, Pablo (Chino Darin), for a drink. Eva (Vicky Luengo) is hurrying to meet her mother for lunch, and Elena (Berta Vázquez) is waiting for friends. Elena is a famous model, and as such, distractingly beautiful.

Pablo, who is confident in dealing with women, sees her searching for a lighter for her cigarette and immediately leaves his seat to go and offer her a light. He does not see Eva walking, nor her him, as they collide. Manel sees Elena and is transfixed, watching her as she reacts to Eva and Pablo falling. He trips over the prone Eva and crashes into Elena.

After all of them have ascertained that there are no injuries, Pablo invites the two women to join them for drinks. Elena’s friends turn up shortly afterward, all models, and she has to leave.

Pablo says they should all go out and gives her his card. The four meet up and go to a club. Elena falls for Manel’s quirky charms and the two become an item. Eva is similarly captivated by Pablo’s lady-killer charms.

Unfortunately, Manel’s insecurities immediately start to manifest; he is convinced that their relationship cannot work due to her extraordinary beauty, in contrast to his somewhat plain appearance. Elena also harbours desires of moving into acting and gets offered a role in a short film. She begins to spend less time with Manel.

The difference is that Pablo also does not try to pull away from Eva. Elena gets offered a film role and is excited. Whilst at a Pride parade, she introduces Manel to her co-star, Lorenzo (Juan Betancourt). Manel sees the chemistry between them.

They spot Eva and Pablo on a party bus going past. Pablo begins to show off, standing on the edge of the bus, dancing. The bus breaks abruptly and he ends up breaking his leg and winds up in the hospital.

Manel and Elena continue to drift apart. She tells him she wants to take a break after he accuses her of sleeping with Lorenzo. Manel spirals downwards and goes drinking with Eva and Pablo.

Pablo tells him he has given up other women because he loves Eva. Eva tells him that if he believes that he is miserable because Elena is happy and that he needs to be happier to affect a different outcome.

Manel acts happy, chatting up women and being more sociable. He takes out another woman, a student, and goes to the same club he went to with Elena. He runs into Elena and tries to pretend he is happy but confesses that he hoped to see her. Elena is still with Lorenzo.

Elena and Manel are breaking up. She tries to tell him that love does not follow thermodynamics, he insults her intelligence, and she gets up and leaves. Manel chases after her.

Elena tells him that the relationship was doomed to fail as it was the only way he would be able to confirm his own theory. Manel loses his assistant teaching position because of his dalliance with a student.

Pablo tells Manel that Eva is pregnant. They all go to Elena’s wedding to Lorenzo. Manel sees Raquel there; she is a friend of Lorenzo. They reconnect. The end.

The Laws of Thermodynamics, written and directed by Mateo Gil, is a highly entertaining film about the nature of relationships, the power of attractiveness and how an individual’s thoughts can impact things.

Sanz is brilliant as the neurotic Manel, hiding behind the laws of thermodynamics as he tries to navigate life and allowing those same neuroses to sabotage any chance of happiness with the luminous Vázquez’s Elena. Vázquez too is great as the model-cum-actress, whose exceptional looks cause men to make fools of themselves.

Darin—who also is in Netflix’s excellent Mirage—as Pablo completely embodies the vibe of a man used to meeting women, confident in his status and his attractiveness to the opposite sex.

Luengo’s Eva is a hard role for an actress to embody without seeming a little foolish and downtrodden, but Gil’s script allows her to inhabit the part without the character looking desperate.

The film is told in a looping timeline, flashing back and forth, but with the help of voiceover from Manel and title cards, one is never lost as to where one is in the story.

There are also scenes where we see Manel’s mind at work, imagining scenarios and various outcomes in his meetings with Elena. The collision scene, where the four of them meet, is a wonderful piece of filmmaking.

Shown from different angles and viewpoints, it is humorous and informative. The only minor gripe for some might be the interspersing of various scientists talking about the laws of thermodynamics, very much in the style of 1989’s When Harry Met Sally.