Brenda (Tasha Smith) is the widow of former chief of staff to the Senator (Michael Toland), Clarence Harper (Sean Dominic). Local reporter, Pamela Odell (Kearia Schroeder), a close friend of the family, covers the funeral on the news. After the funeral, the Senator, who was in attendance, comes and gives his condolences to Brenda, Brenda’s mother, Dolly (Telma Hopkins) and daughter, Kristen (Sydney Elise Johnson).

Pamela comes over with her husband, Cain (RonReaco Lee) to offer her condolences. Brenda tells her that she and the family are going to leave the city for a few days, and go and stay at their home in the country. The Senator calls Cain over. He tells him that with Clarence’s death, he will become the new chief of staff.

Brenda, Dolly, and Kristen leave the city and head to the country house. The three women settle in. As evening falls, Kristen takes Dolly some soup and her medication. The medication is for lung cancer. Dolly tells her to grab her flask from her bag. Kristen leaves her grandmother. Brenda comes to say goodnight to her mother. She sees that she is having whiskey with her medication, and comments that the mix of the two will knock her out.

The ladies retire for the night. Brenda is awoken in the night by somebody at the door. It is Cain, and he is frantic. He starts to apologise, coming into the house. He goes back to the front door and opens it to two masked men with guns. They come in and take them both hostage. Cain says to Brenda they forced him to bring him to her house.

They go and find Kristen. They leave Dolly sleeping, knocked out by the pills and whiskey. The men hold the three hostages in the lounge. Brenda wants to know what the men want, she tells them that they can have money. They don’t want money. They take her to the safe. What they are looking for is not in the safe. They are looking for a file. Brenda does not know about the file.

you can trust me… tell me where the file is…!

Cain tells the masked man that he knows him. He is the security agent, Spears (Dustin Harnish). Spears acknowledges that he is indeed who he thinks he is. Spears says they will have to execute plan B. He takes Cain and Brenda back to the lounge. Cain tries to overpower Spears, causing him to drop his gun. Brenda grabs the gun and threatens to kill Spears. The gun is not loaded. He takes it back off of her.

They take the three of them down to the basement and tie them up. Cain asks Brenda about the file. She tells him that she knows nothing about the file. He tells her that they have Pamela and his sons. Cain tells her about some files that Clarence found indicating corruption in the government and off-shore accounts. The captors come back and take Cain and Brenda.

They have Pamela in the kitchen. They do not feel like Brenda or Cain are cooperating. They kill Pamela to show they are serious. Spears tells Brenda that Clarence was killed with a poison that induced his heart attack. He tells her that he also plans to fake a history of her mental state and kill all of the family, blaming it on her, unless she gives them what they want.

The take them back to the basement and search the house for the file. Kristen manages to free herself and untie the other two. Brenda tells her to go and grab the grandmother’s phone and call the police. Cain causes a distraction, and Kristen escapes and gets the phone. The other agent, Trent (Paul Logan) goes after her. He catches her, but not before she calls the police.

The police come around and Spears tells Brenda to get rid of them. Dolly wakes up with the commotion and comes to see what is happening. Trent is holding a knife to Kristen’s throat. He does not want to go back to jail. Brenda gets rid of the police. Dolly and Brenda are taken to the basement.

Trent is getting antsy, he wants to kill them and leave. Brenda tells them she thinks that her lawyer might have the file. Dolly insults Spears. He knocks her out with a kick. Brenda attacks him in a fit of rage but is quickly beat down. Trent is still unhappy. He is worried about the police. He points his gun at Brenda. Spears tells him not to kill her.

Cain shoots Trent. It turns out he is the mastermind behind the whole ordeal. He grabs Brenda, they are going to go and visit her lawyer. He tells Brenda why he is executing his plan. Clarence did tell him about the corruption, and Cain had suggested they use it to further their political ambitions. Clarence had no interest in that. He also tells her he was the one who poisoned Clarence.

Cain wants the file so he can become Vice President, and eventually President. Cain takes Brenda into town to meet the lawyer. Back at the country house, Spears is preparing to dispose of Trent’s body.

He pours acid into the metal bath. Cain and Brenda collect the file. Kristen escapes again, freeing herself with Trent’s’ discarded dagger. She surprises Spears and stabs him in the thigh. He slaps her and she hits him with a tray causing him to fall into the bath of acid.

Brenda tells Cain to call Spears. Spears, who is dead, does not answer. Brenda hits Cain in the groin and takes the car. She drives back to the country house. Cain steals a car from a man at gunpoint and follows after her.

Back in the country, Cain catches up with Brenda. He persuades her that the best option is to blame Spears for everything, as long as he gets the file. Brenda insists on a copy of the file. A year later, Cain is Vice President. Brenda comes to see him at his inauguration. She pricks him in the back and he suffers a heart attack. The end. 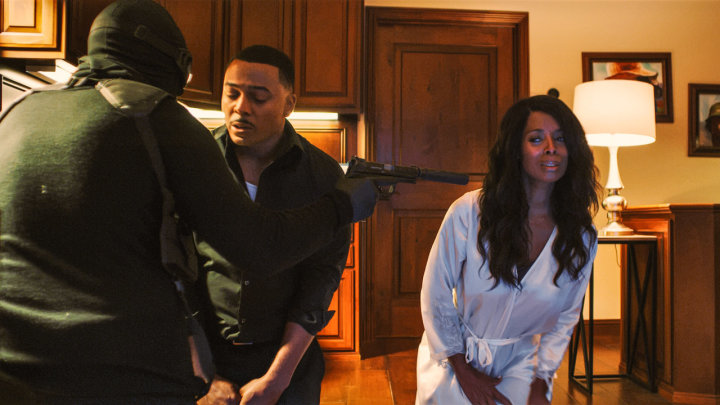 Running Out Of Time, produced, written, and directed by Christopher B Stokes, is an okay, patchy thriller. Following the well-trodden ground of corrupt and/or ambitious men within the political sphere prepared to do anything to gain power, Running Out Of Time is an occasionally clunky, unsubtle addition to the genre of such political thrillers.

Stokes, who was also behind the wretched We Belong Together, is much more comfortable when writing and directing subject matter that is more urban in nature. The first half of Running Out Of Time is so unnatural sounding and awkward it is as though Stokes has never heard of The West Wing, Absolute Power or Marathon Man, let alone seen them.

Visually, the film looks good if a little too teal and orange for my liking. The house in the country is absolutely beautiful and looks amazing in a high definition show house kind of way.

Stokes, for a veteran of some twenty-five directing credits, decides to use slow motion in the most random places, the slowing of the image not adding to the story or impact at all.

Stokes also, with a background in directing music videos, allows the music to overwhelm some of the scenes. There is a supposedly emotional scene when Smith’s Brenda is alone, thinking one can only guess—there is no montage sequence—about her recently departed husband. It is basically a music video, and it’s wholly underwhelming and a little jarring.

The fact that Lee’s Cain turned out to be the big bad was about as surprising as Christmas being in December. Having said that, once he revealed himself to be the mastermind behind the ordeal, the film improved greatly, the pace and script were much more suited to Stokes’ directing style.

At ninety-seven minutes long, Running Out Of Time is not an overly long film, and after the midway point, moves along quite swiftly. If you can get past the ham-fisted dialogue and exposition, and forgive the ropey acting, something that is exacerbated by the poor script, Running Out Of Time is a mediocre thriller worth a look if you have nothing else watch.