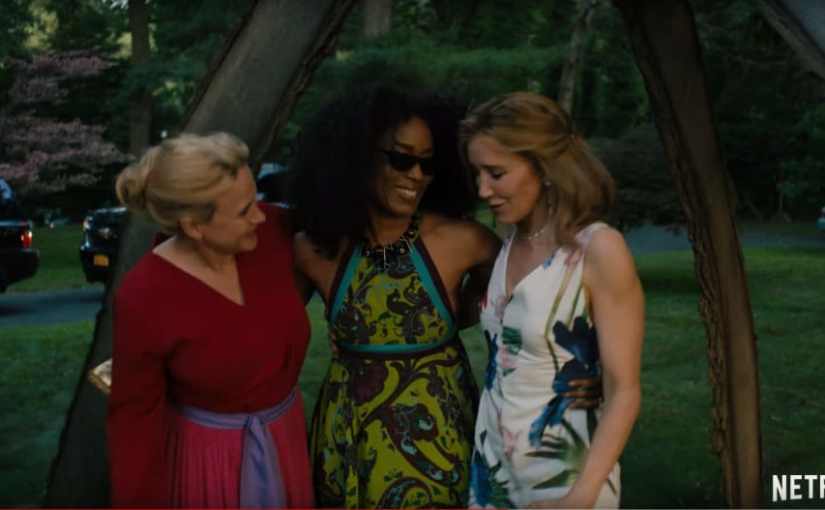 I am beginning to think I watch too many films. I remember thinking the same thing about the late and venerable Barry Norman, film critic on the BBC’s Film from 1972 to 1998. He was a veritable font of film knowledge and sometimes this knowledge would make him seem jaded, bored by the repetitiousness on view.

In no way can I claim to have even a modicum of the knowledge of Norman, but I do watch and have watched a lot of films. Because of the critical appraisal, I tend to do on films, I notice things very quickly when watching a film, especially on Netflix, and can admit to being overly critical.

This prejudice is something that I have to be wary of when watching films, because, like the readers of new scripts at production companies, I judge a film in the first 10 minutes. With this in mind, and with a goodish recommendation from a friend who had watched it and reviewed it before I did, I decided to give Otherhood, another Netflix production, a look.

With three A-listers in Angela Bassett, Felicity Huffman, and Patricia Arquette leading the charge and based on the book Whatever Makes You Happy by William Sutcliffe, Otherhood is an okay family comedy that I am guessing, having not read the book, does not quite do the book justice. Let me explain.

Carol Walker (Bassett), Gillian Lieberman (Arquette), and Helen Halston (Huffman) are three upper-middle-class friends whose sons grew up and went to school together. Their sons are now all grown up and have moved away to New York, and the mothers are feeling abandoned, a feeling exacerbated by the fact that their sons barely make an effort, even for Mother’s Day.

Helen, a high maintenance, remarried, and anxious woman, persuades her two friends that they should go and visit their sons. In New York, Daniel (Jake Hoffman) Gillian’s son, is being goaded by his friends, the other sons, Paul (Jake Lacy), Helen’s son and Matt (Sinqua Walls), the son of Carol, to propose to his girlfriend, Erin (Heidi Gardner). They drive him to her apartment and he goes up to see her.

He lets himself into the apartment, looking for Erin and finds her with another man. The mothers drive to New York. Carol goes to her son, Matt’s place. Matt is somewhat surprised to see her and reluctantly lets her into his apartment, an apartment that reflects the life of a young man who is not too worried about tidiness.

Carol feels like her son no longer knows her. They do not really have a relationship. She tells him that she is going to stay for a few days. Helen goes to see Paul, but chickens out and goes and stays in a hotel.

Gillian tries to contact Daniel, but cannot get hold of him. She goes to stay in a hotel. She contacts Helen. Helen lies to her, telling her she is with her son.

The three women meet up the next day. Helen keeps on going on about her ex-husband. Gillian, who had met up with her boy, sets him up with a date. Daniel meets up with the date, Alison (Molly Bernard).

She turns out to be hung up her ex-husband and oddly fascinated with egg analogies. Daniel, ignoring her egg story, remembers his break-up with Erin. He had left her for five weeks and she had moved on.

Helen makes dinner for her son and his partner, Andre (Frank De Julio) and their housemates. Whilst preparing the dinner, Andre tells her that Paul felt abandoned by her after she divorced his father. At the dinner, Helen takes umbrage at the fact that Paul came out to his father but not to her. He did not think he needed to come out to her.

Gillian goes through some photos on her son’s computer and sees how much he loves Erin. Matt is surprised by his mother as he returns home with a young woman, Angel (Elizabeth Cappuccino). He tells his mother he has been seeing her for four months.

Carol discovers that she is only 17. Matt did not know, even though he had been seeing her. The next day, Carol expresses disappointment at Matt’s lifestyle and his work-life choice.

They argue about his deceased father, Matt unhappy at being expected to live up to his departed father’s standards. Matt has to go to work. Carol wants to meet after work, but he has a work party.

The women go shopping. Carol has decided to go to the party. Gillian takes her to a salon to get her hair done. Erin works at the salon.

Erin recognises Gillian. Gillian apologises for not liking her on meeting her the one and only time she did. Erin takes it in good grace and gives Carol a wonderful makeover. Gillian apologises to her again. Erin tells her that she is leaving for Los Angeles.

Helen meets her son for lunch. He tells her that he has donated sperm to some lesbian friends so they could have a baby. He also tells her she is too hung up on the ex-husband. She wants to be a grandparent, but he tells her that the women do not want her to be in the baby’s life.

Carol goes to the party. She meets Julia (Afton Williamson), bonding with her and pouring her heart out about Matt. Back at the hotel, Helen is trying to persuade Gillian to go clubbing. A drunk Carol tells Julia that her son is a good man and needs a nice woman.

Matt spots his mother dancing. She tells him she is going to party all night. She meets up with the other two and they all go out and have a gay old time.

Julia comes looking for Carol the next day at Matt’s apartment. She left her phone. Matt thinks she is sleeping, but when he goes to check, finds she is not in the apartment. The three sons go to the hotel and find all three women worse for wear after their night of fun.

The women go shopping again, Helen, determined to see her grandchild, buys baby clothes to see the child. Gillian tells Helen that they are sick of hearing about her ex-husband. Helen accuses her of being jealous.

She tells them that she got divorced because of her ex-husband’s infidelity. She tells them she had the courage to divorce him, unlike Gillian. She also tells Gillian that she destroyed Daniel’s relationship.

Helen tells Carol that her husband also slept with someone. Carol and Gillian leave Helen. Gillian tells Daniel that if he loves Erin, he should go for it before it is too late. Helen stalks Andrea (Becki Newton), the mother of her biological granddaughter. Andrea shows compassion and lets her sees the baby.

Gillian tells Daniel about his father’s infidelity in an attempt to help him view Erin differently. Daniel is not sure he can forgive Erin. Carol goes home to the house she shared with her departed husband and clears all memories of him out of the house. Helen returns home and shows her second husband, Frank (Damian Young), true love.

Matt sends his mother flowers and a letter listing the 10 things he loves about her. Daniel chases Erin’s moving truck. He gets in the truck and drives to Los Angeles with her. A year later, she is pregnant and they are getting married. The three women, who have not been together since the New York trip, reconnect. The end.

Otherhood is written by Mark Andrus and Cindy Chupack, with Chupack also on directing duties. As I pointed out earlier, it is from a book by William Sutcliffe and, truthfully, it is noticeable, even in an obvious “women’s” film, that it was written by a man.

Otherhood has some good scenes that, in a more fleshed-out film, would have been great. The acting across the board is good from all concerned, as one would expect. The dynamics between the mothers and sons are believable, allowing for a suspension of belief in certain aspects of the plot.

Huffman gets the meatiest of the roles as the hyper-sensitive and vainglorious Helen. Her snarkiness and emotional bullying are wholly believable and recognisable.

Arquette perfectly suits her role as a more earthy and pragmatic mother in Gillian, to the somewhat morose Daniel. Bassett’s Carol is defined by her role as widow and mother, struggling to find herself even after more than a decade of her husband being dead.

Still, the good performances cannot hide the script and story deficiencies. These women are entirely defined by their roles as mothers? Really? They are supposed to be women in their 50s, with Gillian and Helen both still married.

Carol, being widowed, might feel a little lonely, but to suggest that their lives are so bereft of activity that they feel the need to go and accost their sons for not acknowledging Mother’s Day is a little farfetched.

Even with the modern penchant for embracing gay relationships, with Lacy’s Paul being gay and the granddaughter being raised in a lesbian union, the premise is still hetro-normal, with the mothers ultimately looking for their sons to settle down.

At 100 minutes long, Otherhood is not a long film; and given the truncated nature of some of the story elements, it is probably too short. Having said that, the film moves along at a nice pace, with the casts likeable performances making it an easy viewing experience.

Otherhood is not a bad film and will be enjoyable to most, especially if you are not as picky as this particular film critic.