Office Uprising is a comedy-horror written by Peter Gamble and Ian Shorr and directed by Lin Oeding. It scores a respectable six point two on IMDB with a great cast led by Brenton Thwaites, who is in the dark and highly entertaining Netflix series DC’s Titans as Nightwing/Dick Grayson. Jane Levy, best known for her turn as Tessa in Suburgatory, also stars, along with Karan Soni, who is recognisable from the Deadpool films as well as many other roles.

A darling of the Comic-Con circuits and self-confessed television geek, Zachery Levi, is also in the film. Office Uprising has attracted some good names for this project and, truthfully, it is not very good. It is passably enjoyable, thoroughly silly and inoffensive but it is not good. Let me explain.

Ammotech is a weapons manufacturing company run by Franklin Gantt (Gregg Henry), a redneck whose only concern is making money. Desmond (Thwaites) works in accounting at the company headquarters. Desmond is a bit of a wastrel, late for work regularly and lackadaisical in approach to his job. His boss, Adam Nusbaum (Levi), calls him to his office.

Nusbaum wants to know how the project he is supposed to be writing up is going. Desmond lies and tells him it is going well. Nusbaum tells him that the company is merging with another weapons company and jobs will be lost. Desmond returns to his desk. Lentworth (Kurt Fuller) gets Desmond’s attention. He asks him if he has been fired. He tells him he has not.

Lentworth tells him that half of the accounting department has been laid off. Mourad (Soni) joins in the conversation, he tells them that one of the ladies in their department has cleared her desk out. Desmond tells them not to panic.

Marcus Gantt (Sam Daly), the nephew of Franklin, comes and interrupts the discussion, goading and ridiculing the three men, confident that he will not be getting laid off any time soon.

Desmond gets called down to the research and development department by Nicholas Frohm (Ian Harding), one of the company’s scientist. Frohm treats him with disdain. Desmond, who he needs to write a document so as to push through a new project, deliberately slows the project down.

Desmond returns to his desk. He prank calls Mourad, pretending to be Nusbaum. Mourad is momentarily worried but then realises that it is Desmond. Mourad tells him that the only reason he stays in his job is because of Samantha (Levy).

Everyone in the company is called for a motivational seminar, where they are addressed by Gantt. Desmond leaves early, going home to write a report. 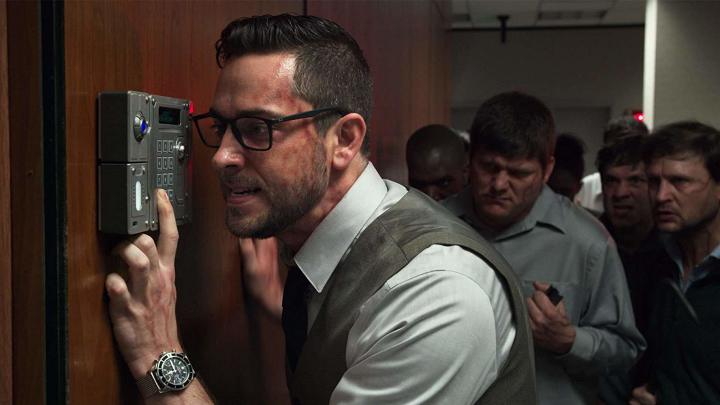 We just want to talk…

He sees some workmen unpacking a pallet of energy drinks, Zolt, but thinks nothing of it. His plan to be more productive and responsible is quickly derailed by his flatmates, pulling him into juvenile antics outside. Sometime later, Desmond wakes up at his computer, the project only on its first draft. He rushes to work. He does not notice that there are dead bodies strewn around the office, quickly rushing to his cubicle.

Desmond is summoned to Nusbaum’s office. Nusbaum is acting very strangely, obsessed with a pencil. Desmond watches him warily, listening to his crazy monologue. He notices an office worker dead on the floor, killed with several hundred pencils. Nusbaum tells Desmond that, because he spelt his name incorrectly, he will have to go. Permanently.

Nusbaum throws Desmond through the wall, into the open-plan office area. In the office area, Desmond sees that everybody is now afflicted by the same strange affliction that Nusbaum has. Everyone in the office seems to have turned into a zombie, with uncontrollable rage and bloodlust.

Desmond goes to find Samantha. She seems normal but shows moments of being affected. Desmond realises it is the energy drink, Zolt, that has caused the transformation. Samantha has only drunk a small amount. After she attacks him, he realises that he has to restrain her if he wants to save her. 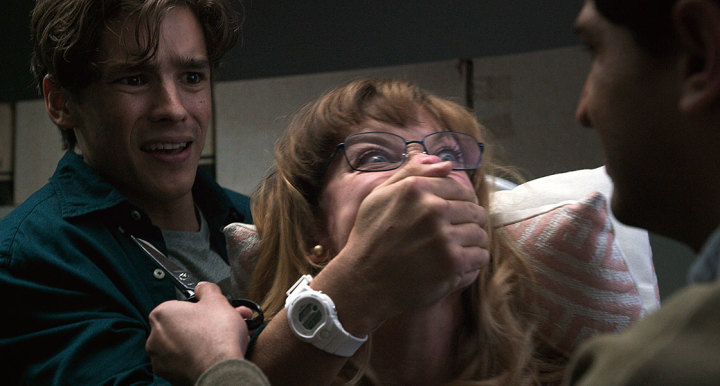 Desmond tapes Samantha to a trolley. He tries to take her down the stairs but finds Nusbaum and an army of zombies are roaming the building. He hides in a cupboard with Samantha. Mourad is already hiding in the cupboard.

Out in the office area, Nusbaum and his crew from accounting, come across Bob (Alan Ritchson—who also appears in Titans), manager of the advertising division. Nusbaum wants them to join him. Bob does not want to give up control. Nusbaum cuts his head off and absorbs advertising into his horde.

Desmond, Mourad and a restrained Samantha, go to the stairwell. On the stairs, zombies are ripping one another apart. They go to take the lift but that too proves to be an option they do not have. Finding themselves in an office, Desmond has another plan. He picks up a printer to throw through the window, even as the other two try to stop him.

The printer bounces off of the window and triggers a building shutdown, with shutters covering the whole building, locking them in. The only way to get the shutters opened is to get to the executive offices and Gantt.

They get near the offices but have to get past his elderly, zombied assistant, Helen (Chesta Drake). Desmond hits her with a pot plant. She then attacks Mourad. He panics and runs her into an exit sign, killing her. They then have to navigate their way through the HR department.

The whole department is women and they are all rabid. Lentworth goes to pick up his final cheque having been laid off. Desmond and the others see him and try to warn him.

The entire department converges on Lentworth. Desmond makes an announcement, pretending to be Nusbaum. One of the girls twigs that it is not Nusbaum and they turn their attention back to Lentworth.

Samantha gets their attention and tells the department that the head of the department, Lisa (Ashton DeGroot) has been spreading rumours about the other girls and saving money at their expense. The girl all turn on Lisa. Desmond, Samantha and Mourad, along with Lentworth, escape.

They have to fight their way across the sales floor, the whole floor turned zombies by Zolt. They fight their way to the offices of Gantt. Samantha falls ill as the Zolt is having an adverse effect on her. They get to Gantt’s but he refuses to let them in. A janitor exits the office and they get in.

Gantt tells them that the Zolt was meant to be for soldiers, to increase their alertness. But the first batch was not right, a disgruntled ex-employee delivered it to the building and that is what was turning everybody crazy. Gantt says they have no antidote for Zolt.

Nusbaum comes to the office. He wants Gantt to open up the building so as to take Zolt worldwide. Gantt goads him, telling him that the doors are impregnable. Nusbaum asks if the walls are as well. They break in through the walls. Lentworth decides to drink Zolt and join the zombies. They immediately kill him. 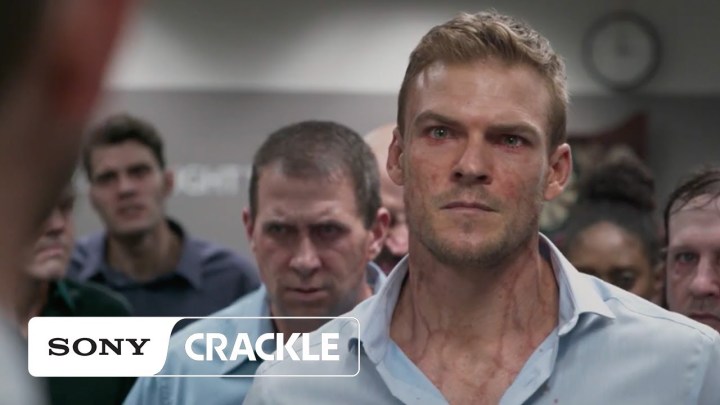 Never felt better. Why do you ask?

Nusbaum’s men swarm the office, killing his cronies and taking control of the office. Gantt retreats to a smaller office, armed with a shotgun, Samantha, Desmond and Mourad with him. Gantt kills a few zombies but then Nusbaum cuts his hand off, needing his thumbprint to open the building. He tells a few of his minions to kill Desmond and the others.

Desmond kills the zombie minions. Samantha is getting worse. They take her down to the science division where Frohm is still alive, having not drunk any of the Zolt as he helped to create it and knows about its properties.

He tells Desmond that they need to get a particular compound held in the warehouse. The only problem is, the zombie horde is in the warehouse carrying out Nusbaum’s plan.

Nusbaum sees them trying to sneak into the warehouse and sends everybody after them. Desmond and Mourad kill tens of zombies as they try to get to the compound. Meanwhile, Nusbaum has got into a weapons robot and is now hunting them. Desmond gives Mourad the compound and goes to divert Nusbaum’s attention.

Samantha gets cured and comes to help Desmond. They run from the building pursued by Nusbaum. Desmond throws a mine at him. Nusbaum steps on the mine as they escape the building and it blows the building up. Desmond and Samantha kiss. The end.

Now, when I say the film is not very good, that does not mean it is bad. It is just a very niche film, for those who love a silly, horror-comedy. It is, I would say, deliberately bad in some aspects, with the ludicrous storyline and the likes of Levi enjoying being the baddie with added cheese.

What makes the film work is the cast play it completely straight as if their entirely ridiculous situation is just something they have found themselves in and have to deal with. In this regard, it embraces the spirit of Sharknado the true standard-bearer when it comes to accepting a wholly incredulous premise.

Unlike Girls With Balls, Office Uprising has a tenuous story that, if the writer had wanted to, could have been worked into a serious, darker horror. Admittedly, even though I have watched a fair few of them, I am not a big fan of horror-comedies, not the deliberate ones.

I just feel that, unless a horror film is a serious affair, horror has inherent comedic qualities, especially as it tends to be extreme in a visual sense.

Office Uprising, at ninety-two minutes long, bumps along nicely, all its silliness on display and the performances from all ably contribute to a film that, if you are into horror-comedy, does exactly what you expect. Office Uprising is an easy, humorous viewing experience for a relaxing evening or afternoon.