I have lived in London, the United Kingdom, all of my life. Born and bred here, you would think that I would know life here quite well. Growing up and around lower-middle-class people and having moved towards middle-class in adulthood, with a glimpse of the upper-middle-classes, I feel that I have a pretty good knowledge of the lives of Londoners, regardless of their social status.

Hampstead, a gentle comedy-drama on Netflix, is set in—the title somewhat of a giveaway—Hampstead, a northwestern region of London, my home town. It is a notably affluent area of Greater London, not as much of a melting pot as the more urban areas, nor as busy.

I have driven through Hampstead on occasion but never had any reason to visit the area as, as far as I know, I do not know anybody in the area. From what I can see in the film, it is a beautiful, village-like, area, though this may just be the Richard Curtis effect. Let me explain.

Emily Walters (Diane Keaton) is a mature, widowed American, living in a flat in Hampstead. She meets up with ladies within the building she lives in for a community meeting. Fiona (Lesley Manville), is the de facto leader of the small women’s group, pushing various projects and coercing the ladies into supporting her ventures.

Fiona’s latest project is to get behind a project to change an old local hospital into new flats. She wants all the women to submit letters to the council, asking that the project be granted planning permission. She ends the meeting.

Fiona corners Emily and invites her to dinner but Emily declines, knowing that she will try to introduce her to some mature bachelor. On the heath, Leon Rolands (Will Smith —not that one) is looking for Donald Horner (Brendan Gleeson). He is in front of Donald’s shack of a home, which is built on the land. He is there to give him an eviction notice.

Donald wanders up as he is looking in through the window. Donald does not say anything, letting Leon speak uninterrupted. Leon hands him an eviction notice. Donald wraps the notice around a carrot and gives it back to him.

Emily’s son, Phillip (James Norton) comes to see her. He has been talking to her accountant and tells her she is running out of money. He tells her he has been offered a job and will be moving abroad.

Back at home, Emily is looking through her possessions, up in the attic. She comes across an old pair of binoculars and decides to look out across Hampstead and the heath. She sees Donald bathing in the river.

Her snooping is interrupted by a phone call. Fiona has given James Smythe (Jason Watkins) Emily’s number. He is an accountant, calling her under the guise of helping her with her finances. He invites her out to lunch to discuss her finances. 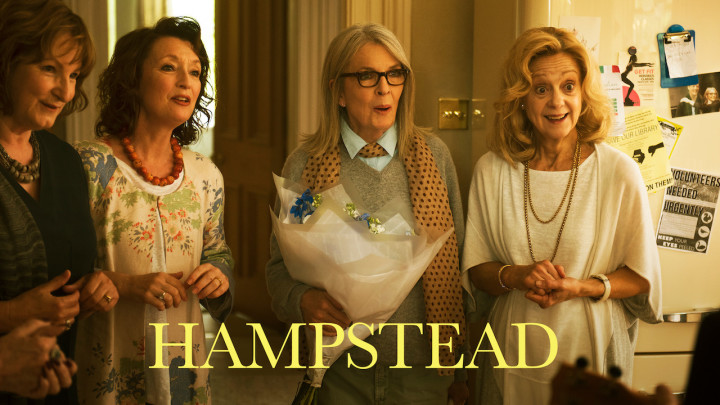 This isn’t a Richard Curtis film? Oh my…!

Emily meets James for lunch the next day. He tells her he can help her with her financial situation whilst making a less than subtle play for her affections. Returning from the lunch, Emily goes up to the attic, hoping to see Donald through the binoculars again. She does see him, but he is being attacked. She calls the police.

The next day, Fiona has another cause for the women to fight. She wants to collect signatures opposing mobile phone mast. Emily gamely tries to garner signatures with not much luck. She goes looking for Donald and finds him in the local graveyard. Donald gets up from his seat and begins to walk off.

Emily follows after him, making the excuse of trying to gain his signature. Donald has no interest. She tells him that she saw him getting attacked and was the one who called the police. He stops and talks to her and they exchange names.

Emily returns home and is accosted by Fiona. She wants to know how her date with James went. Emily did not realise it was a date. Fiona changes the subject, she wants Emily to know if she has written to the council about the housing project as yet. Emily says she has not.

Emily looks out over at the home-shack where Donald lives. He has left a message for her on his roof, inviting her to dinner. She goes to meet him the next day and finds him fishing. He tells her they are catching dinner.

They return to his home. Emily finds it charming. They talk over dinner and Emily tells him she found an eviction notice of his. He burns it. He asks her what she does, pointing out that she supports causes she does not believe in and has friends she does not like. Emily leaves.

The next day, Emily is determined to help Donald keep his property. She enlists the help of Erik (Hugh Skinner), a local conservationist, in helping to publicise Donald’s plight. Donald returns to his home to find a crowd of conservationist with placards around his home. He is not happy.

Emily tells him that he will have to fight for his property. He tells her that it is none of her concern and he did not ask for her help. Emily goes to dinner with James. He is still awkwardly trying to woo her. She sees another message from Donald out of the window later that evening.

He invites her to dinner again. He takes her for a picnic in the grounds of the graveyard. The subject of his home comes up again and Donald rages against the thought of his home being taken away. Emily does not know what he is talking about. He tells her he has received a court summons.

Emily takes Donald to meet a solicitor, Wiggin (Adeel Akhtar). Wiggin tells him that he needs to prove that he has been a resident of his home and on the land for more than twelve years. Donald tells him he has been there for seventeen years. Wiggin says that is good but he needs to have documented proof of that. 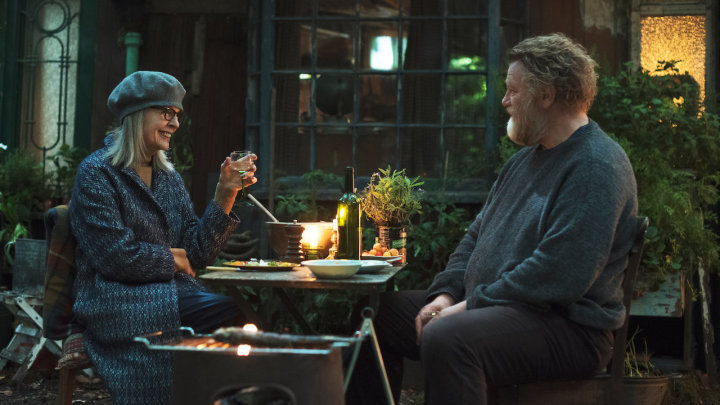 I may be poor, but I’m charming…

Emily and Donald spend the rest of the day together. When they return to his home, they find it has been vandalised. Emily tells him to come home with her and they will sort it out in the morning. Emily’s son comes over for breakfast and runs into Donald. They exchange an awkward introduction.

Emily goes to see Donald. Erik is helping to rebuild his home. He tells her about a relationship that changed him, how a love of his died of cancer. Emily tells him she is going to make dinner for him that night. She returns home and is truly surprised to find her apartment full of people. It is a surprise birthday party for her.

Donald comes over and goes up into the attic room. The party follows him up there, with James telling him he should not be there and Fiona getting involved as well. Donald leaves. Emily tells the party that she is seeing Donald.

She also asks Fiona if it is because her husband has money in the housing project that she wants the hospital project to get permission She goes after Donald.

The court hearing arrives and Emily goes to court with Donald. The council’s solicitor argues that Donald does not contribute to society and actually cost the state. Donald argues that the has had his home for seventeen years and is seld-sufficient. The judge (Simon Callow), explains that he needs proof of his length of stay. They adjourn until the next day.

Emily talks with a morose Donald and tells him that they need to find the man who helped him with moving an oven into his place some seventeen years before. They go to the man’s house, Sid (Phil Davis). Sid is not happy to see Donald.

Sid is in court to testify the next day. Sid relates the story of helping a highly critical Donald move on to the Heath, even injuring himself and having to go to the hospital. The opposing counsel questions him, asking if he can prove that it was seventeen years before.

Sid pulls out a document from the night he went to A and E. The document proves that he was indeed on the heath seventeen years before. Donald wins the case and is awarded the land.

Emily talks to Donald a little while after. She has to sell her flat and pay off her creditors. She wants them to start a life together. Donald does not want to move. Emily sells up and moves on, leaving London. Donald sells up and buys a houseboat. He finds Emily. The end.

Hampstead is a nice film, with a charming, independent, underdog theme. Gleeson is great as the gruff Donald and Keaton’s natural charm oozes off of the screen. The two work wonderfully together on the screen, their chemistry and natural flow helping the film along.

As I alluded to at the beginning of the article, the world that is portrayed in Hampstead is not one that I recognise, even if some of the characters are familiar. Hampstead is a rom-com that shows an older couple finding love, something that is not very common in cinema.

At one hundred minutes long, Hampstead is not overly long and moves along at a good pace. Though the story of Donald wanting to stay on the heath is compelling, it is the love story that is the heart of the film. Hampstead is a heartwarming film that I would happily recommend.