Brief Synopsis: Alan’s wife, Marie, is expecting their first child and her family history is extensive and large. Alan does not know his family, having been given up for adoption as a baby.

Family is very important to Marie, so, after getting his adoption records through a favour from his father-in-law, he goes in search of his maternal family. He finds out he has five siblings.

Is it any good?: Sextuplets is basically a showcase for Marlon Wayans comedic talents, with him taking on multiple roles in the film. Not a film to be troubling any of the Oscar contenders, Sextuplets is, nonetheless, amusing.

Spoiler territory: Alan (Marlon Wayans) and Marie (Bresha Webb) are expecting their first child. They go to see the doctor Greenberg (Grace Junot) for a final check-up before the birth. The doctor asks about their family history and health. Marie’s family history is easy to trace, as she knows her parents and their lineage.

Alan was given up for adoption as a baby and all his attempts to find his birth parents or family have been futile. Marie tells him to ask her father, Leland (Glynn Turman), to help him find his family. Alan is reluctant to go to his father-in-law. Leland does not like Alan, feeling he is not good enough for his daughter.

At a family gathering put on by Marie’s mother, Janet (Debbi Morgan), to celebrate the impending addition to the family, Alan approaches Leland to ask about getting his adoption records released. Leland asks him if he wants a favour. Alan reluctantly acknowledges that he does. An hour later, Alan has his adoption records.

He finds his mother’s name, Lynette Spellman (Wayans) and address. He leaves his pregnant wife to go and meet her. When he gets to the address, he is met by an obstinate Russell (Wayans) who does not initially even let him into the house. He eventually lets him into the house, after Alan explains that Lynette is his mother.

Russell, an obese, cereal-eating, television-show obsessed homebody is Alan’s brother, not that he is especially happy about finding out he has a sibling. Not only is he his brother, but they are twins.

Alan asks him about their mother. Russell tells him she died. Crushed by a car. Alan is unhappy at the news that his mother has died before he got the chance to meet her. Russell gives Alan a gobstopper. Alan bites into it, breaking a tooth and accidentally spitting it out.

The tooth rolls into a small grill. As Alan tries to retrieve it, he finds a metal box with records and papers. He finds that he is not a twin. He is actually one of six. He and Russell hit the road to track down the other four siblings. 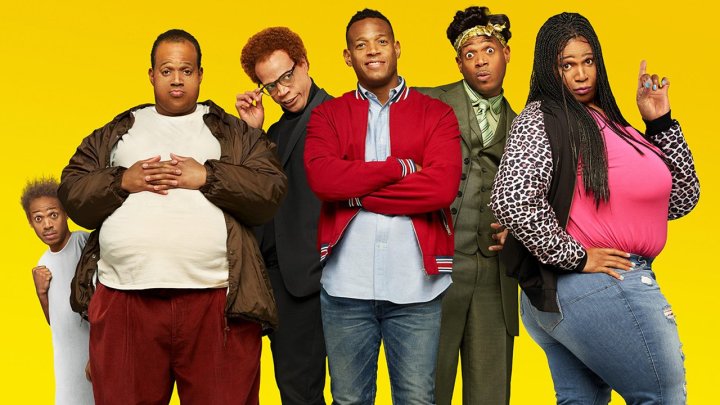 Do we even look related?

The first sibling they go to is Dawn (Wayans), the only female of the sextuplet. Dawn is in prison for assault. Dawn is also an exotic dancer. She asks Alan to pay her bail of $10,000. She joins Alan and Russell on the road.

Back in the city, another sibling, Ethan (Wayans) goes to Alan’s workplace and pretends to be him looking to get a payday. Alan’s boss, Linda (Molly Shannon), likes the new, more aggressive Alan. She likes him a lot. They have a closed-door meeting.

Back on the road, Alan had stopped at a rest stop to pick up some provisions, with the siblings on their way to see Baby Pete (Wayans), another sibling who is in hospital, close to death. Dawn tries to solicit some business from a couple of guys at the rest stop. Alan interrupts, apologising to the men.

As they return to their vehicle, Dawn accidentally breaks the wing mirror of the same guys’ vehicle. They threaten Alan. Dawn steps in to warn them that they do not want to fight with her. One of the men punches Alan, breaking his nose. Dawn hands out an ass-whooping on both of the men.

Meanwhile, Ethan is still trying to be Alan. He sneaks into his home looking for money. He restyles himself, looking like Alan. Marie comes in and thinks he is Alan, even though he speaks differently and has a gold-capped tooth. She tells him they have to go to the breastfeeding class. Ethan is only too happy to attend.

At the hospital, Alan is told he will need surgery to reset his nose. The other siblings are seeing Baby Pete. Alan comes to meet his fourth sibling. He is somewhat surprised to hear that he has been elected as the person to give his kidney to his dying sibling.

Alan does not want to help. When the doctor brings the release forms for Alan to sign, so as he can have his nose reset, Baby Pete secretly swaps the forms, getting him to sign for the transplant.

Ethan’s over-enthusiasm in the breastfeeding class alerts Marie to the fact that he is not Alan. She threatens to call the police, Ethan comes clean. He tells her that he used to have a legitimate business, but the landlord pulled the lease from under him. Marie helps him out.

Alan gets the surgery. Ethan paints the nursery as a thank you for Marie. She loves it. Alan wakes up to find his kidney gone. Baby Pete has left the hospital and the country. A furious and deflated Alan decides he is going home.

Russell tries to stop him and Alan begins to rant at him. As Alan rants, both men get snatched. They are taken to Russell’s house. The person who had them snatched turns out to be Jasper (Wayans), the sixth sibling. 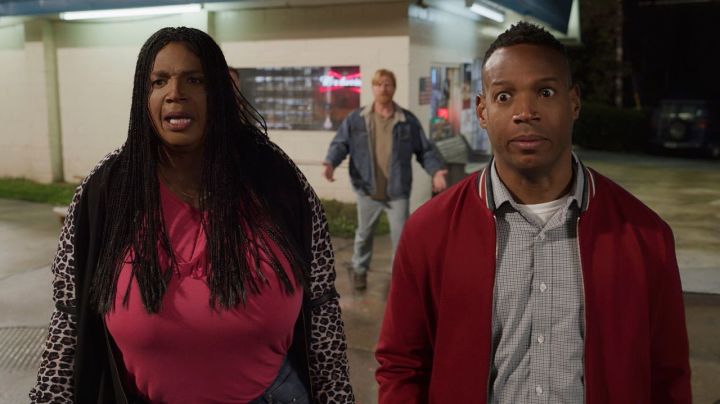 You don’t wanna mess with me…!

Jasper works for a secret government organisation and because of Alan’s wife persistence in searching for him, Jasper felt they were drawing too much attention to him. Jasper wants to kill them, but Alan buys them time by telling him that Russell is a television addict. Jasper wants to know what his favourite show is. Russell tells him The Rockford Files.

Russell boasts how he has rejected all offers for a brochure he owns from one particular fan of the show. Jasper is that fan. Jasper is about to kill them both when the lights go on. Lynette comes in asking Russell who the people are. Alan realises that his mother is actually alive. She says she was too poor to keep the children, as she was a single parent.

Alan gets a call from Marie. Her water has broken and he needs to get to the hospital. Jasper lends them his car and Russell drives. It is the same car that Jim Rockford drove. They hurtle to the hospital, attracting the police on the way. Alan gets to Marie, telling her that the police are after him for speeding.

Ethan, who had taken Marie to the hospital, swaps clothing with Alan to take the rap for him. Three months after the birth, Alan and Marie have the families around to celebrate the baby’s birth. Dawn warns Leland not to give her brother a hard time. Leland asks Alan to tell her to back off as a favour. The extended family get together for a photo. The end.

Sextuplets is enjoyable nonsense. The silly story by Rick Alvarez, Mike Glock and Wayans is basically just a vehicle for Wayans talents. Admittedly, Wayans is good in the multiple roles he takes on, each sibling ably distinguished not only through makeup but also through their characteristics and actions.

Though the story is just a vehicle for the comedy, there are some clever touches, such as Alan breaking his tooth on a gobstopper allowing Ethan later in the story to pass himself off as his sibling, Marie thinking he has capped the broken tooth with gold. There is also Alan getting his nose broken and needing to sign for the surgery, which allows Baby Pete to dupe him into surgery for his own ends.

If you like Wayans comedy, the likes of Scary Movie and White Chicks, you will probably find Sextuplets amusing. If such comedy leaves you cold, this is one you will want to avoid. Directed by Michael Tiddes, it bumps through its 97-minute runtime painlessly, with Wayans likability helping to make the film watchable.

Sextuplets is not a must watch by any means, but if you feel like a brainless chuckle, you could do worse.