Brief Synopsis: Rap superstar, Dom D takes advantage of his status and fandom, inviting voluptuous fan, Lexi, to his after-party. Dom D and Lexi hook up at the party. Five years later, Lexi hears Dom D is back in town. She goes to see him but is prevented from doing so by his security. Lexi kidnaps him.

Is it any good?: No. Fanatic is Misery with a bit of La Doña channelled through a hip hop veneer and bad amateur dramatics. It is badly written, acted and directed. The five-point-four score on IMDB flatters it.

Spoiler territory: Dom D (Hosea Chanchez), whilst performing a show in Washington DC, spots the highly attractive and voluptuous Lexi (Denyce Lawton) from the stage. He tells his security guy, Quan (Shawne Merriman) to go and invite her to the after-party. Lexi, who had gone to the show on her own, is caught outside by Quan. He tells her Dom D wants to meet her.

Lexi comes to the party, but is uncomfortable and leaves. Dom catches up with her and sweet talks her into spending the night with him. She succumbs to his charms. Five years later and Dom D’s life is very different. He is still in the music business and a bigger star than ever, but he is now married and settled down with Zoe (Michelle Mitchenor).

He returns to DC to do another show. Lexi, who is working as a nurse, hears about the show. She dolls up, and goes to the after-party, hoping to reconnect with Dom. She tries to get his attention at the party but is intercepted by Quan, who turns her away. A furious Lexi goes to the bathroom. She hides in a cubicle as she hears women coming into the bathroom.

Amy (Shantelle Lee Cuevas) and a friend come into the bathroom. They are chatting about the party. The friend wants to leave, but Amy is determined to get with Dom. the friend leaves Amy alone in the bathroom, fixing her makeup. Lexi comes out of the bathroom and attacks her, knocking her to the ground.

Dom, who is fulfilling a contractual obligation to be in the club, wants to leave and go home to Zoe. Sosa (Sticky Fingaz), Dom’s manager, tries to persuade him to stay, telling him how much money they are making with the club appearance. Dom insists on leaving. He and Sosa leave the club, Quan following behind.

Sosa sends Quan back into the club to pick up some drinks. Dom gets into the car as Sosa has a cigarette. Lexi knocks Sosa out and maces Dom. she then injects a sedative into him and kidnaps him. A confused Dom wakes up to find Lexi sitting atop him, telling him that they are meant to be together.

Zoe and Quan are at the hospital where a comatose Sosa has been taken. Officer Hardaway (Darius McCrary) tells Zoe that Dom has not been seen since Sosa was attacked and that he is the chief suspect. Zoe is convinced that he is missing.

Lexi tortures a less than compliant Dom. She sedates him again and goes to work at the hospital. At the hospital, she sees Quan and Lexi waiting for Sosa. Lexi kills Sosa. A still restrained Dom remembers how he met Zoe.

Zoe investigates her husband’s disappearance, going back to the club and speaking to the owner, Sylvester (Miguel A. Núñez Jr). He points her in the direction of Amy. Meanwhile, a chained up Dom tries to strangle Lexi. She stabs him and breaks his leg with a baseball bat. She sedates him again.

Zoe goes to see Amy. Amy tells her she was attacked by Lexi who she went to high school with. She says that Lexi was always a little crazy and stalker-ish. Lexi has put Dom into a wheelchair. He is still restrained. Zoe asks Quan to get her a gun. She uses her contacts as a journalist to investigate Lexi.

A deranged Lexi is trying to convince Dom that he and she should be together. She looks through his lyrics notebook and becomes enraged when she sees lyrics dedicated to his wife. She works out his pin number and gets into his phone, checking out photos of Zoe. She rages at Dom about marrying Zoe, saying it should have been her. 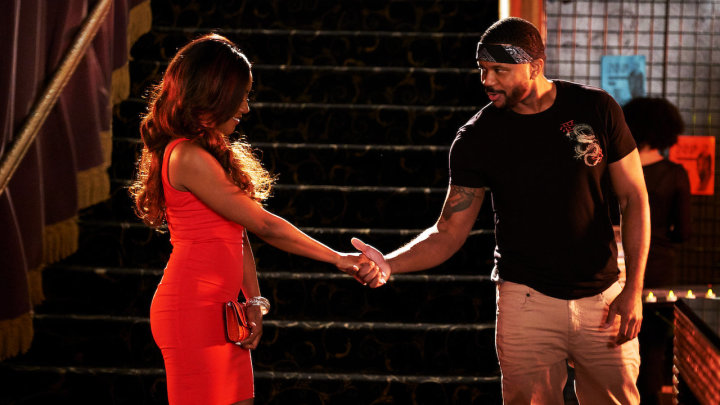 At least we in focus right?

Zoe speaks to Officer Hardaway, who tells her once again that Dom is the chief suspect in regards to Sosa’s death. Dom lies to Lexi, telling her he remembers her. She questions him, wanting him to recall the details of their encounter. She realises he is lying and punishes him by cutting him.

Quan calls Zoe. He has received a text from Dom saying he is heading back to LA. Zoe has not heard anything. Does Quan believe that Dom would leave without her? Quan does not. He turns around.

Zoe’s friend, Timothy (Zac Titus), has news about Lexi. It turns out that she has a very troubled past. Lexi has been in mental institutions and had other issues. Lexi tells Dom that she wants them to be together. Dom tells her he loves his wife.

Zoe goes to see Lexi at her house. Lexi threatens her with a gun. Zoe receives a text from Dom’s phone. It tells her their relationship is not working out, and that he has gone back to LA. Zoe is not convinced. Zoe is back telling Dom she wants to have his baby.

Zoe returns her hotel room and is met by Officer Hardaway. He has received a complaint from Lexi. He tells her she should go back to LA. Zoe tells him that she is sure that Lexi has something to do with Dom’s disappearance. Hardaway tells her he can make life very difficult for her.

Zoe receives another call from Timothy. Had she looked at the information that he had sent? She had not had time. Timothy tells her about Lexi. Her father died of a stroke and she had a miscarriage. Her father did not know she was pregnant, because she had suffered a gang-rape and had not told him.

The entire incident had been recorded and released on the dark web. She had also been hospitalised several times for miscarriages. Lexi meanwhile, is preparing a bath to baptise Dom in. Zoe returns to Lexi’s home searching for Dom. She watches the tape of Lexi’s rape. Hardaway comes and catches her.

It turns out he was one of the rapists, and his guilt from that act, as well as his misguided love for her, has him helping Lexi in her warped life. Hardaway lays out his entire complicity in the snatching of Dom, and is helping her cover her tracks. Zoe records the conversation. She sends the conversation to her editor.

Hardaway approaches Zoe. She attacks him, knocking him to the ground. Both reach for their guns. Lexi has put a semiconscious Dom into the tub and hears the gunshot. She goes to investigate. Quan sees her leave the basement and goes to rescue Dom. Lexi finds Hardaway dead and tries to shoot Zoe.

Zoe confronts Lexi and tries to talk her down, telling her she understands her suffering. They fight and Lexi’s gun goes off. Lexi is shot. They call emergency services and Dom is taken to the hospital along with a still alive Lexi.

Some months later, Zoe is pregnant and receives a call from Dom, who is away on tour. She receives another call. It is Lexi, she says she is ‘wifey’ and a door opens behind Zoe. The end.

Fanatic is terrible. With a convoluted story by Allen Blackwell and script by Camara Davis and Paul D Hannah, the film takes the lazy stalker trope and tries to hide behind a soap-opera-esque, gang-rape storyline. It is a total mess.

Poorly directed by Keith L. Smith, it is shocking that Smith, a cinematographer of some one hundred and twenty credits, should have such poor shot selection. There are extreme close-ups that simply do not work, random off-kilter shots of Lexi and lazy tripod shots when movement would have enhanced the shot.

It is the story that is really poor though. Fanatic is a wretched piece of cinema, irritatingly relying on well-worn stereotypes to try and inject some sort of drama into proceedings. The ‘angry’ black woman in film, whether it be in comedy or drama, is such an overused stereotype it is becoming insulting.

Though Mitchenor’s Zoe was shown as a positive black woman, the rest of the film is so bad it hardly matters. Lawton’s Lexi, who was batshit crazy, waited five years to exorcise her crazy on Chanchez’s Dom. Five years? What was she doing? Hanging out in mental institutions? Her total madness did not stop her from getting a highly responsible job.

As is the case with a lot of these cinema/made-for-TV hybrids, the music is cranked up to eleven, and as subtle as a shit stain in white pants. The actors try to work with the clunky script, but it is just too woeful and proves beyond the cast’s herculean efforts.

Just whose idea it was to throw in McCrary’s Hardaway as the belated catalyst to Lexi’s craziness, I do not know, but it was not a good one. It just made a bad story worse, not to mention the need for murder mystery-like exposition scene for his involvement towards the end.

The horror film ending of Lexi still being around is exasperating and another reason to avoid this film. At ninety-one minutes long, Fanatic is not lengthy, but it is still too long for any right-minded person to sit through. With an estimated budget of one point two million dollars, it is a cheap production and it shows.

Fanatic is a cheap film and a bad film. Avoid.