Abel is heading for victory in his political campaign, supported by his loving wife, Nora. When an old friend, Victor, from his past, threatens to expose a particular incident that would ruin his credibility, Nora, unbeknownst to Abel, fights to keep the truths from coming out.

Is it any good?

Unbridled is okay-ish. It promises more than it delivers and has characters involved who, frustratingly, are no more than red herrings, neither affecting the story nor moving it forward.

A panicked Victor Alarcón (Ignacio Mateos) is driving Abel (Daniel Grao) and Carlos (Marcus Ruiz) after the three have been out drinking and taking drugs. Abel is passed out in the backseat. In the passenger seat, Carlos has overdosed and is struggling to stay lucid.

A desperate and frightened Victor drops him outside of the hospital emergency department and drives away. He goes and sees Nora (Natalia de Molina). She asks him about Abel. He tells her he took him to his house but he is not in a good place. She tells him that he is going to help her.

Victor does not want to. Nora is not taking no for an answer. He is going to help her help Abel. Six years later and their lives are very different. Nora and Abel are married and Abel is running for political office, to become the Andalusian president. Part of Abel’s campaign strategy is a promise to fight political corruption.

Nora gets up early and leaves Abel sleeping, going off to the town. As she departs, she stops seeing a car pulling up to her home. A woman gets out of the car. Nora waits for a bit. Her phone rings, it is an unknown number. She rejects the call. Abel goes to meet his campaign advisor, Martin (Mario Tardón). The campaign is going very well and Abel’s popularity is through the roof.

Abel insists on having a particular photographer, an old friend, taking his photographs. Martin gets the photo book. He acknowledges that Felix’s (Borja Luna), the photographer’s, work is very good. Felix knew Abel when he was party animal and like to take drugs. He was part of the same crowd. 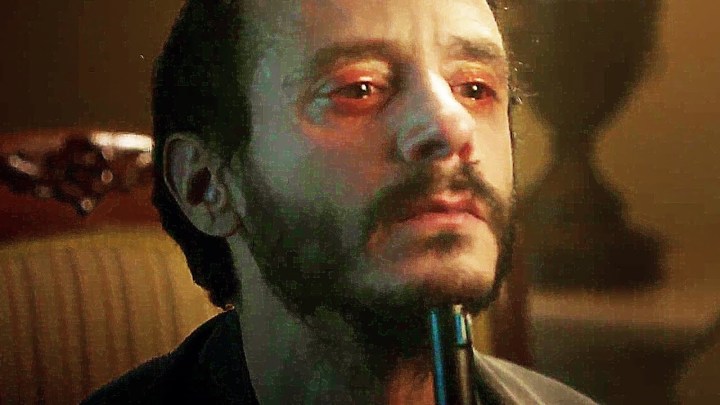 Abel meets Nora back at the house. She tells him that she has prepared the spare room for Felix. Abel tells her that a woman came to see her, Virginia (Natalia Mateo).

She was in Seville and thought she would come and visit. Abel remembers her from the past, he feels she is a little weird. Nora tells him that she bought flowers for Carlos’ grave and that he should go visit his brother’s grave. Abel says he will try. Nora is not convinced.

Felix arrives and the three have dinner. Nora is not happy about Abel replying to text at the table. He tells her it is Martin and he is coming to the party at the weekend. Nora does not really know him and says it is not really a party, more a work thing for him.

Felix jokes about him no longer having just scummy friends. Felix says he should speak about his old friends when he swears in. He also mentions how he will be the boss of Victor. Victor’s father was a powerful figure and a man with money and influence when they were all younger and partying.

Abel refuses to rise to the bait. Felix keeps needling Abel about Victor’s influence and their connection. Abel refuses to talk about him. Later, when Abel is sleeping, Nora puts hundreds of euros into an envelope. She hides the envelope in a book.

The next day, Felix is taking photographs of Abel whilst he interviews him. Abel tells him that his mother used to work for the Alarcón family. Nora is off to a clandestine meeting in a remote location. She sees a car. In the car she sees Virginia sleeping. Victor, who she has come to meet, turns up. Nora is nervous having seen Virginia.

Nora wants to cancel the meeting but Victor insists. She gives Victor the envelope. She waits for him to give her a receipt but Victor is stalling. He tells her he needs to speak to her. He records her speaking about their arrangement. Nora is furious but Victor tells her he only wants her to convince Abel not to fire him when he ascends to power.

He will not use the recording if she does as he asks. A horn sounds. The taxi that Nora had asked to wait is trying to get her attention. The horn wakes Virginia. Victor tells Nora she has until Sunday. He leaves. Virginia recognises Nora and calls out to her. She drives her home. Nora lies to her, telling her she had spotted her car and came to check on her. 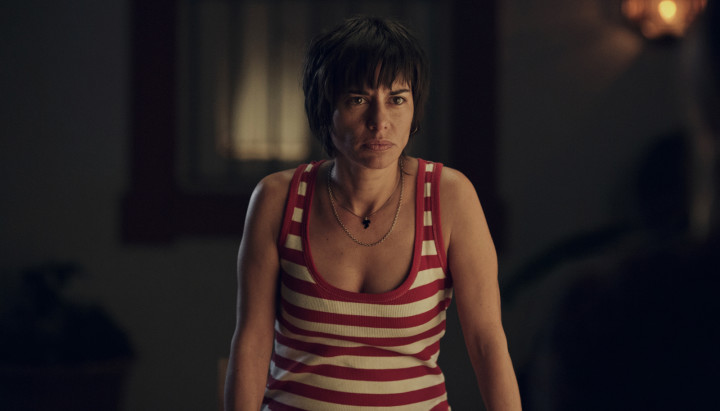 This will be good on my showreel.

Felix and Abel discuss Victor’s father, who is in jail. Abel assures Felix that he is suffering for his crimes. Nora invites Virginia to stay at their home whilst she is in town. Later, Nora tries to convince Abel to keep Victor on when he rises to power.

Abel does not know that Nora and Victor have an arrangement. She tells him that she saw him and felt sorry for him, saying he looked down on his luck.

Abel does not want to talk about Victor, his animosity towards him is obvious. Nora keeps trying and Abel thinks that Victor has come to the house to asks for his job. Abel says that as soon as he is in power, Victor and his people are out.

Virginia goes to visit Victor. He is abrupt with her, relishing the power her attraction to him seems to give him. Even though it is morning, Victor insists they have a drink together. She reluctantly agrees. Victor is not happy about her disappearing on him five years before. She wants to know what he and Nora are up to.

Victor lives with his mother, who is incontinent and a little senile. Virginia cleans her up. Back at Abel and Nora’s, Felix is still snapping away. Nora tells Abel she is pregnant, hoping that she might be able to persuade him not to fire Victor because of the stress of the situation and the guilt of having Victor as a friend.

Abel says he is not guilty, he just wants to stand up to bullies with money. With only a day until Victor’s deadline to carry out his threat, Nora texts him, telling him that she needs more time. At dinner, Virginia takes exception to Felix wanting to take a photograph of her. Nora curtly quietens her.

Nora confronts Virginia in the kitchen. Virginia tells her that she knows that she was lying about seeing her from the road as she had deliberately hidden her car. Nora tells her about her issue with Victor.

She tells her about how she knew she had to help Abel after Carlos died. She used Victor’s guilt over the incident to persuade him to give her the money to take Abel away to get cleaned up.

Nora has paid all the money back but, because it came from his father’s crooked dealings, the knowledge of it could derail Abel’s campaign. Abel does not know and blames Victor for Carlos’ death.

Virginia offers to help her. Felix overhears the conversation. Martin asks Abel if there are any skeletons that he needs to know about. Abel tells him there are none.

Virginia goes to sees Victor and seduces him. She does not even try to get the recording. Victor calls Martin. He tells him about the recording and how he is going to the press. Martin tries to get hold of Abel but, having gone for a run, he has left his phone at home. Nora rejects the calls and hides the phone.

Felix says he is leaving. Nora wants him to stay to support Abel. Virginia returns. She tells Nora she could not do anything about the recording. Nora borrows her car and goes looking for Victor. She contemplates killing him by pushing him under a train but loses the nerve. Abel asks Nora if she has seen his phone. She lies.

The party is underway and Martin turns up. He makes a beeline for Abel and tells him about his call from Victor. Abel confronts Nora. He wants to know why she took the money. She tells him that it was to help him and she has paid it all back. Abel is disgusted. Nora says it is all her fault. He tells her that nobody will care.

Abel tells her that she must tell the press that it was all down to her and he knew nothing about it. She wonders aloud what will happen to her. He does not answer. He does not care. Martin interrupts them. Victor has come to see Abel.

Abel angrily confronts Victor. Victor gives him the recording. He tells him that Nora gave him a second chance. Abel goes and apologises to Nora, saying he knows she did it all for him. She tells him she is leaving. The end. 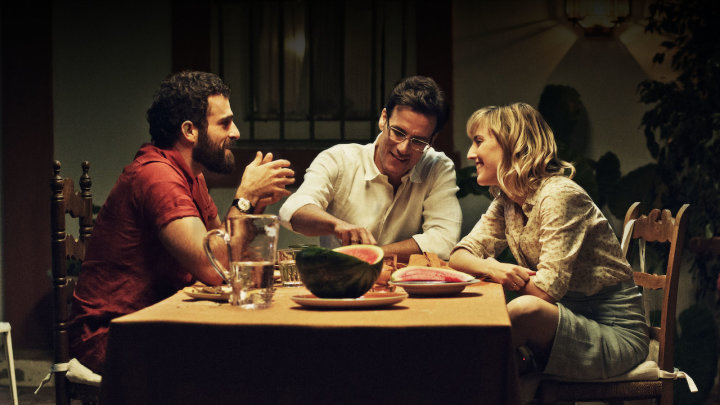 Another great shot for my reel!

Unbridled or Animales sin Collar—which translates as Animals without Collars—is a Spanish thriller that has a good premise but is unsatisfactory. Written and directed by Jota Linares, Unbridled has good performances from all involved, especially Natalia de Molina as Nora. The story of a spouse trying to keep a secret or protect a loved one is one that resonates with most, so Unbridled, even with the story being fashioned around a political campaign, already had that in its favour.

Unfortunately, there are too many unnecessary elements introduced. Natalia Mateo’s Virginia was an interesting but ultimately pointless, character. She had a relationship with Ignacio Mateos’ Victor, which obviously had some history to it, something the actors managed to convey beautifully, but it did not move the story along at all.

The same can be said for Borja Luna’s Felix. He had even less to do in the film. Linares seemed to put him into the film so as he would have someone to channel exposition through. The fact that he seemed to be stirring things up and lurking around, was a story thread that went absolutely nowhere.

Truthfully, one does not care about Daniel Grao’s Abel’s campaign. Not that it is a problem, as the story is not about the campaign and Grao is too good an actor to have been wasted in the way he is in Unbridled. Almost every scene he is in is exposition.

At least de Molina gets to emote and her scenes with Mateos are strong as well. Even Mateo’s Virginia does not have to suffer as many exposition-heavy scenes as Grao does and, as I mentioned before, her character does not add to the story.

The story is, ultimately, about guilt and responsibility, two subjects that are brilliant for any dramatic story. Linares just does not use either well enough to make one appreciate the acuteness of the characters’ situation. Instead of the characters being challenged, we, the viewer, are battered with exposition and explanations. Very frustrating.

Visually, the film is well lensed, the shot selection working really well and keeping you engaged. There is one standout scene that comes near the end that, had the preceding ninety-five minutes been good, would have been excellent. It is the scene when Nora realises that she is putting more into the relationship than Abel is.

Not only is it well-acted, it is also beautifully written. If Linares can string together scenes of that standard over a ninety-minute runtime, that is a film I would be happy to watch. Unbridled is not that film.