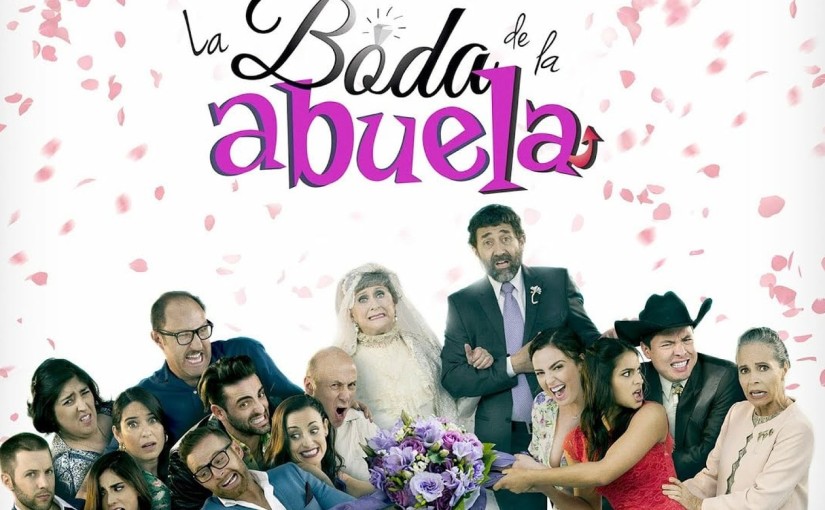 Brief synopsis: When the grandmother of a large family tells her family that she is getting married to the gardener, they support her decision despite some reservations and various internal familial squabbles. A year later, the grandmother’s family is preparing to meet her fiancé’s family.

When the grandmother’s well-to-do, city-dwelling family meet the gardener’s more urban, rural family as well as the culture clash, the gardener’s mother is not amused to see her son marrying a much older woman.

Is it any good?: truthfully, it is not the best film. That being said, I did enjoy it and it is very much in the style of many Spanish/Latin American comedies. It is amusing without being laugh out loud and the story is transparent to the point of not really being there.

At ninety-seven minutes long it will not take up too much of your time and is worth a look if you like a light comedy.

She says she has an announcement. She is getting married. To Julio (Dino Garcia), the gardener. The family, though displaying some shock and obvious reservations, support her. A year later, the families prepare to meet for the first time before the wedding.

Julio warns Abuela that his mother, Aurora (Macaria) can be challenging. Aurora, a religious woman, gives thanks in a church that her eldest son has finally decided to settle down and marry. She is a little disappointed that he could not find a local girl but is reassured, by her son, that his future wife is a good woman.

Abuela is having another family meeting. Daniel is threatening not to attending the wedding if his brother is going. He is angry that his brother got together with his former girlfriend, Andrea (Paola Nuñez). An emotional Diana says she will not attend either if anyone is not going. Abuela takes charge and quells all arguments. She wants everyone to come together to impress Julio’s family.

Later, Ana is with her Juan Pablo and discovers an engagement ring. She confronts him with it. Juan Pablo, caught by surprise, tells he wanted to plan his proposal but, as she has discovered the ring, he decides to propose on the spot. Ana runs from the house leaving Juan Pablo confused.

Andrea is arguing with Sebastián. She wants him to tell the family that she is pregnant and plan to marry. Sebastián is reluctant and says that he does not want to ruin Abuela’s wedding. Andrea refuses to go to the wedding.

Ana meets up with the rest of the family to go to the weekend home where they are to meet Julio’s family. She tells them that Juan Pablo is sick and won’t be attending. At the weekend house, the perennially angry Daniel arrives. The first person he meets is Sebastián. He gives him short shrift.

Francisco arrives shortly afterwards. He is obsessed with bringing up his younger baby differently from the rest of his older siblings, wanting to feed him only organic food and limit his exposure to what he considers bad influences. Julio’s family arrive.

Along with his mother, Aurora, are her daughters, Julieta (Renata Notni) and Julia (Marianna Torres), plus a family friend, Rafael (Armando Hernández). Julio comes out to greet his family and is followed by Diana and Gerardo. Seeing the pregnant Diana, Aurora mistakenly believes her son is getting married to Diana. Gerardo explains that Diana is his wife and the child is his.

Abuela comes out afterwards. A visibly shocked Aurora sees how old she is. Abuela calls for a toast to the families. Aurora frowns on the drinking of alcohol so early in the day. Abuela quickly does an about-turn, saying her family rarely drink. She invites Julio’s family to come and see the house and grounds.

Julia, who has gone for a wander around the house on her own, notices a book written by Sebastián. Ana sees her with the book and tells her it is terrible and she should not read it. In private, both families have reservations about the union. Aurora’s clan think she is too old and the family to grand and Abuela family are convinced he is marrying her for her money.

With very little in common, the families find it very hard to bond. Gerardo suggests they get into small groups and try to bond that way. It works moderately, though Daniel and the headstrong Julia clash over ideals. Sebastián tries to reconnect with Daniel but he will not tell him why Andrea is not there.

Sebastián and Rafael share a room as Andrea is not in attendance. Julia reads Sebastián’s book. Abuela orders food from a local Mexican restaurant and pretends it is home-cooked. At the dinner, Aurora tells Abuela that it is a family tradition to ask for the bride’s hand in marriage. Abuela tells her that they planned to do that the next day. Juan Pablo turns up. Julieta recognises him from his music videos and is excited which irks Ana.

Sebastián tells Ana that Andrea is pregnant and they plan to marry. The next morning, Ana goes to see Juan Pablo. Her meeting is interrupted by an excitable Julieta who wants Juan Pablo to look at her songs. Julia asks Daniel about the book and whether its contents are true. He tells her that it is not all true but most of it is.

Aurora gives Abuela her mother’s wedding dress. Abuela graciously accepts even though it was obviously given to her as an insult. Daniel mistakenly thinks Sebastián and Andrea have broken up which is why she is not at the house. Juan Pablo and Julieta sing a song for the gathered families which incenses Ana. She threatens Julieta.

Julia tells her family about the contents of the book and how it lays bare the family’s real character. Aurora challenges Abuela to cook a meal for everybody whilst they watch on. Abuela, unable to cook, comes clean and admits that the weekend has been a facade. Aurora and the family leave. Daniel blames Sebastián for writing the book even though it was he who confirmed its veracity.

Rafael and Julieta convince the family to return for the wedding. Ana contacts Andrea to asks about love. Rafael and Sebastián get drunk and Rafael confesses his love for Julia. Elsewhere, Julia and Daniel bond over their love of football and end up sleeping together.

The wedding day and Rafael decides to proclaim his love to Julia. Ana apologises to Julieta and Julieta tells her that Juan Pablo really does love her. The ceremony begins. Rafael finds Daniel with Julia and goes berserk. He runs after him with a gun. They interrupt the ceremony and Rafael accidentally shoot Sebastián in the bottom. In the hospital, Sebastián tells Daniel that he and Andrea are having a child and getting married.

Abuela and Julio get married. At the after-party, Ana proposes to Juan Pablo and he accepts. Andrea turns up at the party having been called by Daniel. Aurora and Abuela make peace with one another. The end.

As I said at the beginning, Grandma’s Wedding or – La Boda de la Abuela the original Mexican title – is not a great film and quite predictable if you watch this type of film even though I found it enjoyable. It is a comedy by numbers for the most part and the actors on show are mostly just having fun.

The script by Adriana Pelusi is amusing enough and has an easy enough to follow story but there is nothing especially clever or fresh in its approach. The direction by Javier Colinas is brisk enough and keeps the story moving along nicely.

The editing, by Max Blasquez, Joaquim Marti and Colinas, is worth a mention as they employ lovely screen wipe flourishes that really work with the story and proceedings. The music also is quite pleasant, adding to the atmosphere of the film.

The acting is good from all on show with the whole cast just staying the right side of farce. All the characters are clearly defined and separate, even those who have smaller roles. Grandma’s Wedding is a pleasant enough and not a bad way to waste a couple of hours.