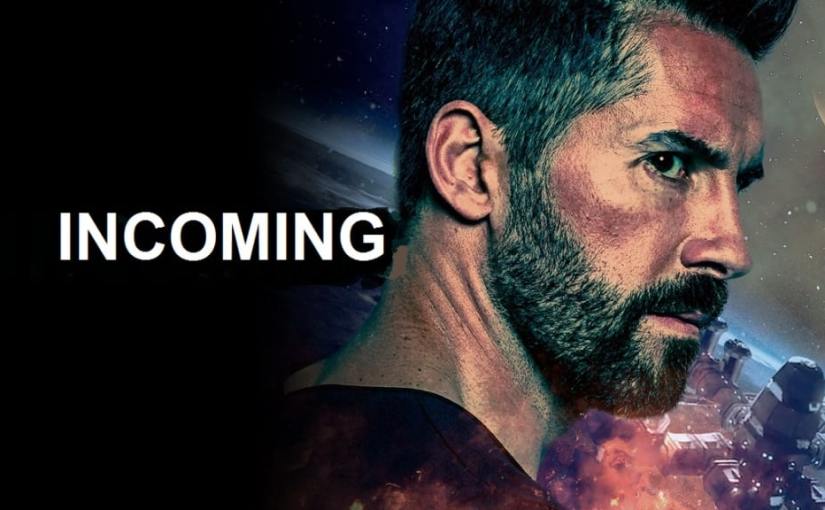 Brief synopsis: several extremely dangerous terrorists are captured and put into a secure prison on a space station. There, they are interrogated for five years. When a crew, including a new doctor, go for a routine monthly check-up of the prisoners, the prisoners escape and the crew must fight to prevent the terrorist crashing the space station into Earth and starting a third world war.

Is it any good?: Incoming is awful and has very few redeeming qualities. It is, at least, in focus and is mercifully short but beyond that, there is really very little to recommend this film. An utter turd.

Spoiler territory: Big Ben is blown up by a terrorist group, The Wolf Pack. Sounds more like the name of a pub, in fact…I digress, the Wolf Pack leader, Argun (Vahidin Prelic) is sitting in a dingy, spartan apartment, watching the news on a laptop – no furniture but perfect wifi. Priorities. – when the police burst into the apartment and arrest him.

Five years later, Argun is woken by a voice shouting his name. The voice is Kingsley (Lukas Loughran), the jailer and torturer. He wants to know where Alpha, the elusive leader of the Wolf Pack, is.

Kingsley’s enjoyment is briefly interrupted by a transmission from Hemmings (Dominic Power) of MI6. He wants to know how the interrogation is going. Apparently, Argun is close to breaking. Hemmings is worried about international relations, especially as Kingsley managed to push all the other countries interrogators out of the space station, leaving him solely in charge.

Kingsley voices concerns about a woman coming as part of the crew for the monthly check-up of the prisoners. Hemmings tells him that Reiser (Scott Adkins) okayed it.

On a shuttle bound for the space station, are Reiser, pilot Bridges (Aaron McCusker) and the doctor, Stone (Michelle Lehane). Reiser and Bridges are quite blasé about the trip, having done it many times before. Stone marvels at the majesty of space. I suppose one would. They reach the space station.

Stone is told about the six prisoners and that Kingsley is the only person looking after them, which is how he likes it. After voicing some concerns about the human rights of the prisoners, Stone is taken by Kingsley to the examination room. She is not too impressed with the room. Kingsley tells her that she is not to reveal any information to the prisoners.

Argun is the first prisoner brought to her. Bridges and Reiser watch the doctor via video. Bridges asks what would happen if the doctor got overpowered. Reiser tells him they are all expendable. Argun tells Stone that he has a record of all the torture that has been meted out to him. Kingsley cuts the session short, dragging Argun back to his cell.

A furious Stone confronts Reiser. She tells him the prisoners are being tortured. Reiser acts as if he had no idea and demands that Kingsley explain himself. Bridges tells them that he is going to prepare for departure.

Stone, left alone, goes and talks to Argun to ask him about the records he told her about. Of course, it turns out to be a ruse and Argun overpowers her and escapes. He frees the other prisoners, the rest of the Wolf Pack.

Kingsley returns to the control centre and sees that all of the prisoners are free. He sounds the alarm, no idea to whom seeing as they are in space. More practically, the three men arm themselves and go after the prisoners.

With no firearms on the space station, all they have are taser guns. and cattle prods. They face off against Argun and his five cohorts; Idris (Alaa Safi), Kunta (Milan Kovacevic), Doku (Arkie Reece), Eibek (Vladimir Aleksic) and Bolat (Milan Jovanovic Strongman).

Reiser, Kingsley and Bridges face off against them. Outnumbered two to one, the three are forced to flee, locking a door behind them. They find Stone in Argun’s cell. Kingsley is furious, blaming her for the whole situation.

Argun and his crew search for the men, even though they saw where they ran off to. They come across a window and realise they are in space. They end up in the control centre and Argun tells them that they need to take the crew hostage.

Bridges asks Reiser about the capture of Argun. Reiser is less than forthcoming but Bridges works out that Argun is Alpha. Kingsley, who has been torturing the man for five years and obviously is not that bright, is stunned.

He goes a little crazy, especially when he realises they had him interrogating the prisoners pointlessly for over three years.

He breaks out of the room that the four of them are holed-up in and is promptly captured by Argun and his thugs. They are more than happy to receive him, wanting to repay him for their five years of torture.

Quite where he thought he was running off to is anybody’s guess. Anyhoo, Argun and a couple of the others hiss threats of retribution at him before Idris has an epiphany.

Outside of the control room, Bridges, Reiser and Stone are looking for supplies. Stone finds some bottled water. Reiser takes a wrench and makes weapons because….meanwhile, Bridges and Stone have an inane conversation about astronauts and Top Gun maybe.

Reiser brings back the makeshift weapons and they prepare to try and get to the power room in order to get a message back to Earth. Back in the control room, Idris is telling them that he can pilot the shuttle and crash the space station in Russia. This really is the plan.

Reiser tells Bridges and Stone about Idris and how he has the knowledge to fly the space shuttle. Back in the control room, Idris tells the others that all he needs are the override codes. One always needs those pesky override codes!

He tells them that they can probably get them from Kingsley. Kingsley’s resistance is quickly broken, along with his left hand and he agrees to override the system. They drag him back to the control centre.

Reiser tells them that they have to get to the control room. They fight with Bolat and Doku. Doku takes a few licks and runs off to tell Argun. Bolat gets his arm broken and is killed by Reiser. A shocked Stone asks him why he killed him. Reiser tells her that none of the prisoners can leave alive. Not the answer she was expecting.

Argun, informed of the death of Bolat and knowing that they will try to stop them, tells the others that they just have to stop them from getting to the control room and shuttle. Bridges, Reiser and Stone get to the power room and contact Earth, informing them of the situation on the space station.

Argun realises that the communications are on and cuts them. Idris programs the space shuttle for re-entry and the engines fire up. Reiser, somewhat obviously, says they have to stop them. Stone thinks they need to save Kingsley.

They move to another section of the station but Reiser stays behind to fight with Doku, who has suddenly found a backbone after running away earlier. Doku is not the greatest fighter and gets cut a lot before Reiser stabs him in the gut. obvs.

He is not quite dead, so Reiser makes a point of slitting his throat in front of Argun, Eibek and Kunta. Eibek rushes at him and is captured by Stone and Bridges. Reiser pushes Stone aside and stabs Eibek multiple time, killing him. Kingsley has died of his wounds.

Reiser explains that they have to prevent the space station crashing into Moss-cow – that’s how they say it – and some other bollocks about leaving all the secrets behind.

Stone reminds him that he brought her to the station to expose it. Stone suggest talking to Argun. The other two scoff, pointing out the fact that he is prepared for martyrdom. Stone says she is going to try anyway.

Stone talks to Argun, telling him she will expose the inhumanity of the station. Argun rages at her about having the desire to die for a cause and not being an animal. It is a waste of an almost good speech. Argun returns to the control room.

He only needs to keep them occupied for half an hour. He locks all of the rooms on the station. They can still get into the control room, the only room they want to get into.

Back on Earth, various security heads talk about about the gravity of the situation and how to deal with it. The Russians must never know! They launch a rocket to destroy the space station.

On the space station, Bridges mocks up some Molotov cocktails and the three of them go to the control room. They throw the Molotovs into the room and there is an explosion. They follow in afterwards.

The explosion has not slowed Argun and Kunta down at all. Reiser fights with Kunta, receiving multiple gut stabs for his trouble. Reiser is hard as nails and just keeps on fighting. Stone takes a taser shot as Bridges tackles Argun. Stone recovers and grabs one of the unexploded Molotovs and throw it at Kunta who is fighting with Reiser. The explosion kills him.

Reiser is so grateful for her assistance that he goes and kicks her in the gut and punches her unconscious. Bridges is still fighting with Argun. Reiser does not help, instead, going after Idris. Idris is waiting for him and they start fighting. Once again, Reiser hands out a beatdown and kills Idris.

In the control room, Bridges is shouting at Stone to go after Reiser. She peels herself off the floor and grabs a makeshift blade, going after Reiser. He laughs at her, sure she would not try to kill him.

She stabs him in the shoulder. Reiser turns on her and punches her in the stomach. He proceeds to strangle her. In the control room, Bridges beats a still defiant Argun unconscious.

Reiser is still strangling Stone. She grabs a fire extinguisher and bashes his head in, killing him. No idea where the extinguisher appeared from. Bridges comes into the docking area and they both get into the shuttle. Bridges flies them home. The space station is destroyed. The end.

Final thoughts: Incoming is an abomination of a film. Usually, a Scott Adkins film is entertaining even if it is not necessarily Oscar fodder. He is a great martial artist and his fans watch his films for the fight scenes.

I suggest they give this one a miss. Incoming is utter rubbish. The story is nonsense, the premise is vaguely okay but badly executed. The acting is passable but nothing to shout about.

The film has no protagonist really, with Reiser turning out to be an antagonist and Stone and Bridges just fighting for their own lives. Argun being Alpha was a ‘meh’ reveal and did not affect the story except for driving the already bonkers Kingsley further over the edge. Reiser bringing Stone on the mission to deliberately to expose its shortcomings, made no sense, especially as he tries to kill her later.

There is a horrible explosion effect right at the beginning of the film, where Big Ben supposedly blows up. It just adds to the awfulness of the film. Incoming is a true turd of a film. Even Adkins’ family would struggle to make a case for this film. Avoid.