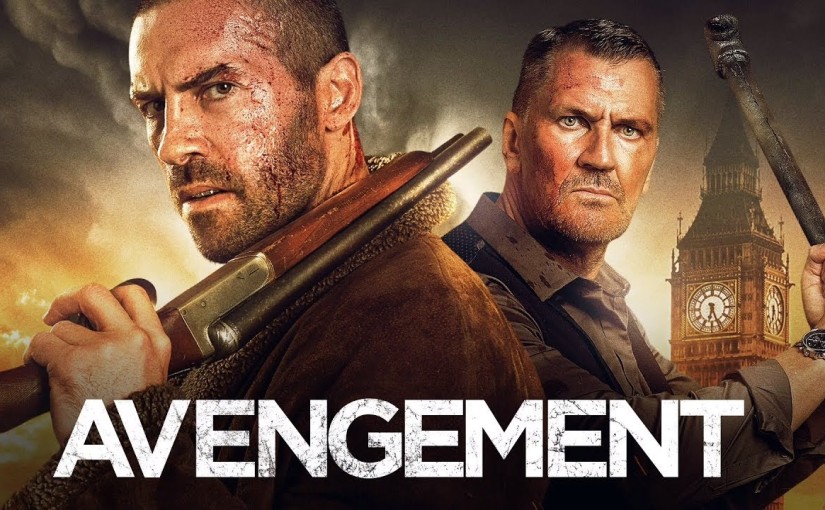 Brief synopsis: Cain Burgess is out for revenge after being set up by his older brother, Lincoln. Imprisoned after getting convicted of manslaughter whilst doing a job for his sibling, Cain finds his stretch in prison is a daily battle for survival after Lincoln puts a bounty on his head. When he gets granted permission to see his dying mother, Cain escapes and goes after those who betrayed him.

Is it any good?: from a film purist point of view, not really. Starring Scott Adkins—the budget, accent-free JCVD—it is good on action and moderate on acting. Having said that, as a bit of a fan of mister Adkins particular brand of teak-like performances and a lover of a good action film, Avengement is ninety minutes of brainless, fun, entertainment.

Spoiler territory: Cain Burgess(Scott Adkins), a resident of HMS Belmarsh prison, is allowed a temporary release to go and see his dying mother (Jane Thorne). A highly dangerous individual, he is accompanied by six police officers, but he is too late to see his mother who dies before he can see her. Cain escapes from his escort.

He heads to a pub, the Horse and Jockey. Quickly overpowering a couple of security guards at the entrance, he goes in and sits at the bar. The barmaid, Bez (Kierston Wareing), serves him a beer. In the bar, a small group of men are talking business. Mo (Leo Gregory) is telling Vern (Beau Fowler) about the precautions that Hyde (Nick Moran), taking instruction from Lincoln (Craig Fairbrass), has implemented.

Mo asks him if he did not hear about the incident where Rook (Daniel Adegboyega) not only got his hand cut off but ended up dead? Vern just wants to keep doing business. Mo calls to Tune (Thomas Turgoose), who witnessed the incident with Rook. Tune begins to recount the story. He tells how Rook went to confront a mysterious figure that was watching them.

He saw that Rook got his hand cut off and went to help him. Tune says he could not catch the guy because he ran off scared. Cain, who had been listening from his perch at the bar, starts laughing. Tune takes offence. What is he laughing at? Cain accuses him of spinning a bit of a yarn. He recounts what actually happened.

He actually killed Rook and Tune ran off, scared witless. The two door security comes bursting in. Cain gives them a bit of a beating and pulls a shotgun from his coat. He tells everyone to back up. Hyde comes down from the upstairs office wanting to know what all the commotion is. He sees the gun-wielding Cain.

One of the security tries to disarm Cain and gets shot in the leg for his troubles. Cain tells the rest of them to put their mobile phones into a pickled egg jar. The security man is still screaming. Cain knocks him unconscious. Mo tells Hyde that Cain says he killed Rook. Hyde recalls Tune claiming to have chased the assailant away. Is Cain lying then? Tune hesitantly claims that he is.

Cain pulls a bag from his pocket and throws it on the table. He tells Tune to open it. The bag has Rook’s severed hand is in it, verifying Cain’s story. Hyde, cool in the face of Cain’s anger, goads him a little, asking him if prison had turned into a killer. Cain hits him with the butt of the gun. He tells him to get his phone out and call Lincoln. Hyde does as he is told.

Cain, his teeth aluminium and face scarred from many a battle in prison, recounts to the group, how he came to be so battle-hardened. A fighter by trade, he displeased not only his brother Lincoln, but also Hyde, Rook and Lincoln’s accountant, Stokes (Terence Maynard).

A fight he was in, lost them all a great deal of money because he refused to throw it. Cain goes to see his brother nonetheless, telling him he wants to buy a gym and asking him to loan him the money.

Lincoln tells him that he does not lend money to family as it is bad for business. Cain insists he can make his venture work. Lincoln says he will let him have the money if he does an easy job for him. Cain agrees. He is to go and see Hyde. Hyde tells him he is to follow a woman, Mabel Lidell (Teresa Mahoney), who Hyde is going to give a bag to. He is to grab the bag off of her.

Cain takes the job. He grabs the bag off of Mabel but she chases after him. In the chase, she gets hit by a car and killed. Cain is sent to HMS Belmarsh prison for manslaughter. From the time he gets there, he finds that he is a target, getting attacked on the first day, stabbed and having his jaw broken and teeth knocked out.

Cain’s mother comes to see him in prison. He asks her to tell Lincoln to come and see him. He continues to get set upon in prison. The prison counsel extends his sentence after each altercation.

Whilst fighting in the prison yard one day, beating the granny out of several prisoners, one of the defeated prisoners tells him that he has a bounty of twenty grand on his head which why everyone is trying to kill him. The bounty had been put up by his brother.

In the prison, they kept coming for him and Cain kept fighting. He got scalded, stabbed, punched and kicked. His sentence was extended again. Cain’s mother comes to visit him again. She tells him she has cancer and is dying. Then he was allowed to go and visit her, he escaped. 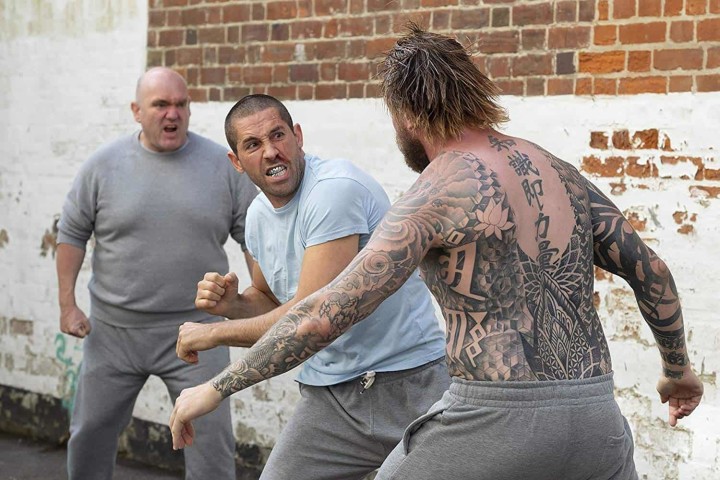 Why do you people keep trying to hit me?!

Cain keeps recounting his story. He tells them about how he heard about his brother’s entrapment business through detective O’Hara (Louis Mandylor) and how his brother had ripped off one hundred and fifty families. Cain, at that time, did not know anything about his brother’s business. O’Hara’s partner, Evans (Ross O’Hennessy), has a different approach to getting information.

Lincoln wants to call Evans. Cain tells him that will be a little difficult. He is dead. He killed him. Lincoln tries to talk Cain around. Hyde, who is on the floor kneeling in front of him, goads him. Cain blows his head off. Cain tells Lincoln that he went to see his accountant and had all his money transferred to the families he ripped off. He told Stokes to leave town.

Cain is at a stand-off. Lincoln tells him he is going to die in the pub. Cain tells him he only wants to kill him. Bez hits Cain with a bottle and the men in the bar attack. Lincoln stays back, sending the rest to take a beat down from the relentless Cain. When only Cain is left standing, Lincoln points the dropped shotgun at him. He pulls the trigger.

The gun is not loaded. Bez gives Lincoln a knife and he tries to stab Cain. Cain overpowers him and kills him. Cain apologises to Bez for messing up the bar and leaves. The end.

Avengement is rip-roaring fun. As is always the case with Adkins’ movies, it is all about the fighting and the fighting is great. The story is engaging enough and makes for a nice vehicle, especially by putting Adkins’ Cain in a situation where he is literally required to fight all of the time.

Written by Jesse V Johnson and Stu Small, with Johnson also on directing duties, Avengement zips through its runtime. Heavily influenced by Guy Ritchie in its styling and even mimicking his writing style, Avengement is a respectful homage, leaning toward flattery rather than awkward replication.

Johnson, who has directed a couple of other films I have reviewed—Triple Threat and The Debt Collector—that have featured the ever-prolific Adkins, shows a real flair for directing action with the fight scenes looking fast, fluid and brutal, whilst still showing what is actually happening, action-wise.

As I have mentioned before, Adkins is not at his strongest as a thespian. That being said, he is highly watchable and if you give him enough things and people to hit and kick, he is worth your subscription money. He is surrounded by enough talent and is adept enough at film to work with his limitations.

Fairbrass, who back in the nineties made a bit of a name for himself, inhabits the role of the antagonist perfectly, physically imposing enough to create fear and mature enough to scowl convincingly. Moran as the snarky Hyde, adds to the Ritchie vibe, having made his name in Ritchie’s breakout film Lock, Stock and Two Smoking Barrels.

If you like action films and do not want to have to think too much about the plot, Avengement is a ninety-minute blast.