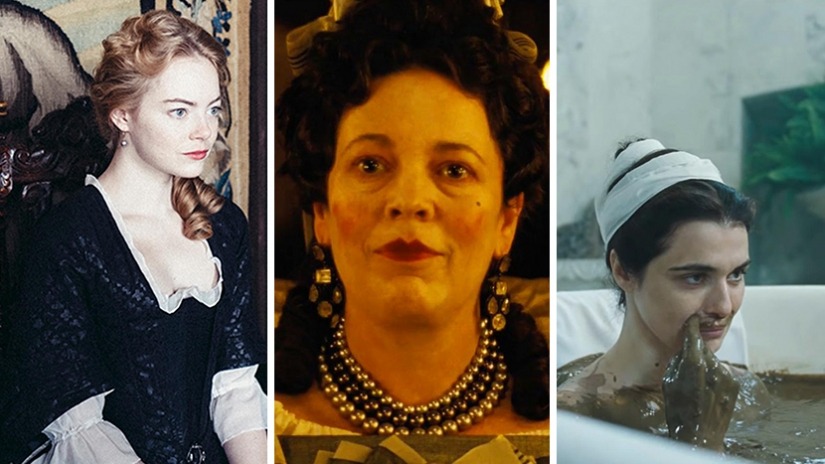 Let me begin this review with my final statement: The Favourite is magnificent, go and see it. You can stop reading now. Still here? Okay, let the gushing begin! It has been quite some time since I’ve seen a film where the performances match – exceeded even – the hype.

Yorgos Lanthimos’ film is an exceptional piece of work. Admittedly I am a little biased, having loved one of his previous works, The Lobster. The Favourite is a very different beast. Resembling another classic piece of cinema, All About Eve, in its story, The Favourite explores more pertinently the personal impact of each individual’s actions.

In this past awards season, Olivia Coleman has, rightfully, received widespread praise and recognition for her performance as sickly, petulant and willfully manipulative ruler, Queen Anne in eighteenth-century England.

Though Coleman’s performance is glorious, it works so well because of Rachel Weisz ’s absorbing dark and powerful portrayal as Lady Sarah Churchill, along with Emma Stone’s slyly cruel showing as Sarah’s seemingly sweet but duplicitous cousin, Abigail Masham.

Weisz’s Sarah is the Queen’s lady-in-waiting and her secret lover. She uses her position and close proximity to the Queen to exercise influence over matters of state and the war with France. When her down-on-her-luck cousin Abigail arrives at the Queen’s court, asking for work, she allows her to stay.

Confident of her status and given no reason to fear her young cousin’s arrival, Sarah focuses her attention on influencing the Queen’s decisions with regards to the war. Abigail, a lowly maid, is treated poorly by the other maids, who mistrust her and dislike her due to her relationship with Sarah.

When the Queen’s gout acts up and causes her great suffering, Abigail sees an opportunity and finds a root in the forest that helps to ease her pain. Initially, offended by her forwardness, Sarah has her beaten.

But when she finds that the treatment helped her Queen, she takes Abigail under her wing. Abigail is now where she wants to be and makes it her mission to better herself and her station in life, regardless of the consequences or impact on others.

As I alluded to earlier, The Favourite is almost a parallel in story to the classic All About Eve. Rachel Weisz’s Lady Sarah is like Bette Davis’ Margo Channing, a star at the peak of her powers, not seeing her possible downfall until it is too late.

Emma Stone’s Abigail is almost exactly like the eponymous Eve Harrington. She shows a deferential willingness initially, but ruthlessly exploits the weakness and opportunities that are presented to her.

So who is Olivia Coleman’s Queen Anne in this parallel, you may ask? She is Hollywood. She is the one who makes or break someone. Without the Queen, the other two have no reason to exist or be.

Besides the exceptional central performances, the script of this film and cinematography are the stars of this film. The palace looks grandiose and claustrophobic at the same time, especially with clever use of some fisheye lenses on occasion. The evening scenes, when characters move about the vast building with only candlelight, are wonderfully atmospheric.

There are so many fantastic walking shots, where the camera just follows either Sarah or Abigail as they stride along or away from the Queen’s quarters. Lanthimos takes the decision to use tracking, as opposed to steady-cam, when walking along the corridor, so there is none of the slightly rough, skewed movement you get in so many modern films.

The script, by Deborah Davis and Tony McNamara, is a delight. Intelligent without being unintelligible. Set against the backdrop of a war, with a fragile monarchy and a caustic, straight-talking, lady-in-waiting and sneaky youngster, all women, all compelling.

The men in the film are both important and unimportant. That is to say that when they are in the story, they serve their purpose, but never detract or are compelling enough to be explored. Also, they help to remind us how women were generally viewed in that time period, especially with the early treatment of Abigail.

The Favourite is one of the best films of 2019 and is, in my opinion, deserving of all the awards and praise it has received.  At two hours long, there are no wasted scenes or lulls that have you looking at your watch. Yorgos Lanthimos has crafted a masterpiece of a film. The Favourite is a magnificent film, go and see it.

I went into the viewing of Whiplash with some trepidation. I must admit, that up to a week ago I had never heard of it. Very unusual for me, considering I am on IMDB everyday and like to keep up with all thing film and television. Especially if, as was the case with this, it is causing a buzz. Trepidation.
Whiplash tells the story of Andrew, a young up and coming drummer, enrolled in a prestigious music school, believes his luck is in when the most respected teacher in the school invites him to join his elite class. What follows is a battle of wills and test of resolve.
Written and directed by Damien Chazelle, Whiplash is a remarkable feat of a film both visually and aurally. The pace is perfect, no unnecessary scenes or stuff left in too show off. Every scene moves the film forward or reveals something about a character. As the music is jazz, the look is, even in the school, mildly jazz bar; cool, orangey hues and shadows, no wild colours.
Miles Teller and J.K. Simmons play student and teacher respectively. Both are perfectly cast. Teller as the drum obsessed, leaning toward autistic, student Andrew and Simmons, departing so far from the comedic roles he is better known for, to deliver a career best performance as the bullying, relentless Fletcher.
This is, in my opinion, a brilliant film. It lives up to all its hype, delivering on every level. It is difficult to contain my excitement for this film. I cannot recommend it highly enough, in fact I did recommend it to a friend and told her I would refund her if she did not like the film!
This is the best film I have seen in a very long time. 2014 was a good year for films, but if the bar for 2015 starts with Whiplash, this could be an exceptional year.

Two things: I am not a big fan of Steve McQueen (director, not long deceased movie star, he was alright). ‘Shame’ was just a horrible, soulless film – my personal opinion – that was trying too hard to be clever. Secondly; actors must absolutely love him. Even though I did not enjoy ‘Shame’, the acting was outstanding and the same can be said of ’12 Years A Slave’. Everybody in the film is good. Is the film good? Yes. Is it great? I don’t believe so. Here is why.

I will watch Chiwetel Ejiofor in any film. He is a fantastic actor, brilliant in every role I have ever seen him play. As the lead in ’12 Years…’ he is very good, given the direction the script and story took. Having not read the book, it is difficult to know how close to the source material the film is. Having said that, I felt the film lacked emotional focus in a way that another ‘true’ story – ‘Roots’ – on the same subject covered nearly four decades ago. As much as, if you did not already know, you feel some indignation for his predicament (spoiler alert) having being pulled from his comfortable life as a free, family man and cast into slavery, I am not sure that the name of Solomon Northrup will resonate for this generation of black people and others who see this film, in the same way as Kunta Kinte does for those of my generation.

The characters of Patsey, played by Lupita Nyong’o and Michael Fassbender as the brutal, God-fearing, Edwin Epps, dominate the second half of the film. Even Mistress Epps, played by Sarah Paulson, is a more interesting character, fiercely jealous and condescending of the ‘help’ and especially Patsey, whom her awful husband takes a shine to.

The film is good and looks wonderful, as you would expect. McQueen is to be commended for bringing to light a little known facet of the slave trade. It would have been even more interesting had he been able to find a British based story, considering he is, after all, a British director. The story of Northrup is not, as shown, exclusive to him and his treatment and that of others who suffered the same such fate, though abhorrent, is well document in both film, word, and documentary.

In terms of subject matter, casting a magnifying glass on a particular black experience, this is, unfortunately, in my opinion, an uninspired choice of black history. The name of Solomon Northrup is not one that will go down in cinematic folklore, even though his story was worth telling, he had already told it.