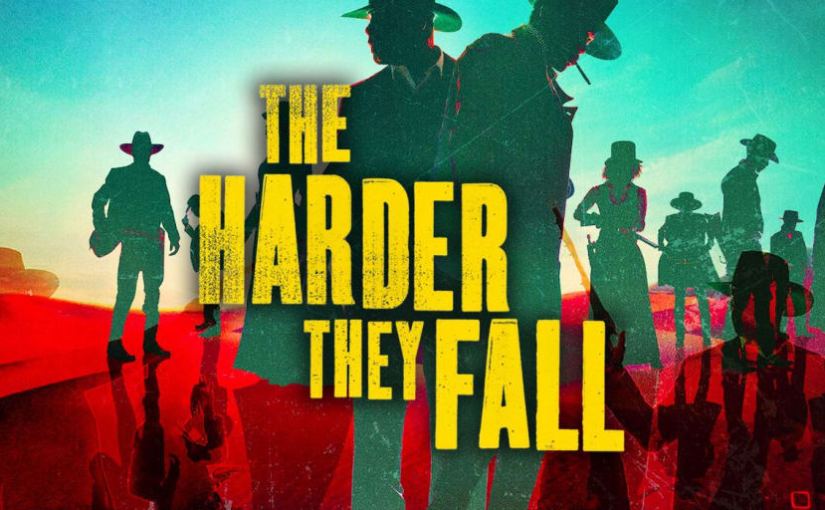 With a screenplay by Jeymes Samuel and Boaz Yakin, with Samuel also on directing duties, The Harder They Fall is a Western made notable by an almost exclusively black cast.

Using the Western staples of revenge and the overthrowing of a small town, The Harder They Fall is a big-screen film forced, by present circumstances, onto the small screen.

A host of well-known stars and actors appear in this well-made film. Idris Elba leads the charge as the antagonist, Rufus Buck. He is ably supported by Regina King, as Trudy Smith, and Lakieth Stanfield as Cherokee Bill.

The story begins with a god-fearing man (Michael Beach) sitting down to eat with his young wife, Eleanor (Dewanda Wise) and son, Nat (Chase Dillon).

There is a knock at the door. Two men come into the house, Rufus and Jesus Cortez (Julio Cesar Cedillo). The man recognises Rufus. He is not glad to see him, knowing that it is not a good omen.

Rufus kills the man and his wife. He carves a cross into young Nat’s forehead. Many years later, a grownup Nat, a well-known outlaw himself, exacts revenge on Cortez.

All of this happens before the credits roll on Samuels’ beautifully crafted and nostalgic homage to Westerns, the Old West and figures from history.

From the outset, the writers state that the film is a work of fiction. Even though all the names are real people from the Western era, the story is fictitious.

The beauty of Samuel and Yakin’s story is that the cast being predominantly black is not important. There are elements of the film, that work better, because of it, but it is not the driving force of the film.

All the actors on show bring their A-game, with standout performances from Regina King and Lakieth Stanfield. Idris Elba is the biggest name on the call sheet.

However, it is Majors’ Love that drives the film, his chilled demeanour carrying proceedings easily. Majors’, who recently appeared in Loki, as the time-travelling villain, Kang, star is in the ascendancy.

Veteran actor, Delroy Lindo, is such a natural fit as the lawman, Bass Reeves, a role made for him to play. There are so many great scenes in the film, from Deon Cole’s Wiley Escoe, as the sheriff of Redwood, bravado monologue before being persuaded to leave town, to Elba’s Rufus final revelation, the film is full of gems.

The music of the film deserves a special mention. There is hip hop, reggae, soul, traditional Western-style music and accents.

Besides the nods to the classic spaghetti Westerns of Sergio Leone, there is a quiet homage to The Magnificent Seven, with the bond amongst Love’s motley crew of protagonists, going beyond greed or need.

There is a wobble, the story of Love’s revenge momentarily overshadowed. Redwood needs saving from the tyranny of Rufus and his gang. This particular storyline peters out, none of the townsfolk figuring in the story later on.

At two-hour-and-nineteen minutes, The Harder They Fall is a long film. It does not feel long. The action is well-spaced out, the peak and troughs of the film, keeping one’s interest throughout.

Jeymes Samuel has fashioned a highly enjoyable film, that is well worth the two hour viewing time.